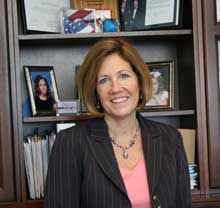 Stopping terror before it strikes sounds like the work of caped crusaders. But for many years, it was on the to-do list of then CIO Deborah Diaz at Homeland Security’s Science and Technology Directorate. She joined before DHS was a department, working until 2007 creating groundbreaking technologies to fight terrorism. Those were what Diaz calls “the real cowboy days.”

Today she serves as Deputy CIO for the United States Patent and Trademark Office in Alexandria. Long involved with the feds, she started her career in more of a Jack Kerouac than Jack Kennedy way. “I’m from Adelboro, Mass, a small industrial town, and was one of the only people to leave at the time. I took out a huge loan and spent a year and a half abroad,” says Diaz, who picked grapes in France, worked on a kibbutz in Israel, and spent her 25th birthday in Casablanca. When she moved to Washington with her husband, a town they agreed would help both their careers, she worked for State, NATO, and the World Bank, much of her work focusing on public/private technology partnerships in sub-Saharan Africa .

In 2000, as a part of President Clinton’s goal of creating one website for thousands of government sites, Diaz became the director of FirstGov. “This was the first time it was ever done. We had one month to put it all together,” says Diaz. It was a wild success, as back then before Google was a verb, search engines had only 10% of government information online. During 9/11, she kept FirstGov up and running, staying in her office across the street from the White House, updating the site rather than evacuating. She also worked with her team on IT interoperability, biometrics and wireless technologies. An example she says, are “those puffer things” at airports that we look at with fascination as we mill around x-ray machines in our socks.

Diaz’s caped crusader days may be over but her role in cutting edge technology certainly is not. “We get first exposure to many different technologieswe get to test trial.”  She concentrates her energies on modernizing every aspect of the agency’s business systems and processes, and notes that most of USPTO’s official trademark applications are done electronically. “We want to make sure that if you’re a homemaker with the latest and greatest technologies, you have a chance.”