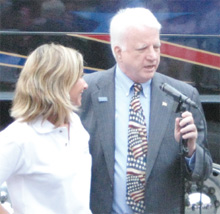 As Senators John McCain (R-AZ) and Barack Obama (D-Ill.) vie for the White House, the race to secure the Virginia vote honed in five miles away on Alexandria part of the Northern Virginia region that could heavily influence each candidates chances of the presidency this past week.

McCains Straight Talk Express parked at an Alexandria residence where rhetoric was geared toward defending the Old Dominions Republican past from its potential blue future.

Im one of the people to try to make sure this [state] goes red, Joe McCain told reporters. Rudy Giuliani called in to offer his support as well.

Its no secret that the city votes overwhelmingly Democratic, as an all-Democrat city council and past voting figures attest. It is the Obama campaigns prerogative to enhance the partys voter turnout here, while McCains campaign looks to defend his partys traditional dominance in the state by breaking into the Northern Virginia political market. Having his campaign headquarters in Arlington and events such as the Straight Talk Express appearance one of 90 house parties across the state that day represent McCains strategy in the city, the region and the state.

The McCain campaign has always considered Virginia to be an important state, especially at the national level, said Gail Gitcho, McCains Mid-Atlantic Regional Communications Director. We have all of the bases covered throughout the state, and that goes for Northern Virginia as well. Were really encouraged and happy with all of the enthusiasm coming out of the area.

Gitcho said that the campaign registers new volunteers from the area every day.

Deans Del Ray visit, including Euille and Moran, was more publicized, and the star power of the NBAs Thomas performing original spoken word poetry, focused on untapped voters. Campaign volunteers carried clipboards with voter registration forms complete with the names of city precincts that are prime for canvassing. Dean urged attendees to start knocking on doors immediately after the rally, emphasizing the small but imperative nuts and bolts of winning an election, like registering and actually showing up at the polls.

My guess is that everybody here is here because they are already voting for Obama, Dean said. We just had fun, now the work starts.

So far this year, almost 5,000 new voters have registered in Alexandria, according to the Virginia State Board of Elections. The last presidential election year, 2004, saw about 2,800 new voters by August; 64 percent of the states newest voters (since Jan. 1) are under 35, a demographic borne out by attendance at the rally, and one that Obama is expected to win.

In November of the last election year there were 76,939 registered voters in the city. Currently, there are 87,952. Both parties are courting the up-for-grab newcomers, but the Democrat-dominated city gives Obama a head start that may or may not swing the Old Dominion.

Alexandria Republicans believe that the citys unregistered voters are just as much theirs as anybodys, and they only way of knowing is to ask, as Virginia does not register voters by party.

Weve been out just about every weekend knocking on doors and making phone calls during the week, Alexandria Republican Party Chairman Chris Marston said. We have identified a lot of Republicans on that we did not know were Republican before.

The true political identity of Alexandrias and Virginias unregistered voters will remain a mystery until November, when each ballot cast will be a party affiliation earned.