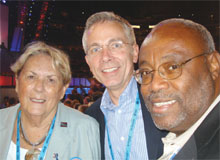 The eyes of the nation were on Alexandrias own Mark Warner Tuesday evening, as Virginias former governor delivered the keynote address for the 2008 Democratic National Convention in Denver.

Speaking before a crowd of 20,000 at the Pepsi Center, the 53-year-old Warner took his trademark message of setting aside partisan politics to bring a message of hope and unity for all Americans to the impassioned delegates.

I know were at the Democratic Convention, but if an idea works, it really doesnt matter if it has an R or D next to it, Warner said in a speech that garnered five standing ovations. This election isnt about liberal versus conservative. Its not about left versus right. Its about the future versus the past. We know that at this critical juncture, we have only one shot to get it right.

Known for his ability to work productively and amicably with Republicans, the moderate Democrat avoided what he referred to as the strategy of tearing down the competition, mentioning McCain only twice as he avoided the malevolence that was the standard theme of other convention speeches.

We need leaders who will appeal to us not as Republicans or Democrats, but first and foremost as Americans, said Warner in a commanding and charismatic delivery of his 16-minute address.

In that regard, he echoed his predecessor of four years ago, when Barack Obama focused on hope for the future in a convention keynote that launched his meteoric rise in the Democratic Party.

Warners featured role underscored the importance the Obama campaign has put on winning the states 13 electoral votes away from Republicans, who have carried the state in every presidential election since 1964.

Murray Bonitt, an Alexandria resident and longtime friend and confidant of Warner, was with him in Denver and spoke to The Alexandria Times from the convention floor immediately following the speech.

Mark was fabulous, said an enthusiastic Bonitt. He really knocked it out of the park. Its the best speech Ive seen him give.

Mark represented our state well, Bonitt continued. He talked about what matters the future. For him, its always been about the future and reaching across the aisle.

Retired T.C. Williams schoolteacher Hazel Rigby was among those delegates and concurred with Bonitt.

Mark was right on, said Rigby, a past president of the Alexandria Education Association. Mark was warm and friendly, and very well-received on the floor. The crowd was very enthusiastic.

Warner used part of his address to shine the spotlight on his accomplishments as a Democratic governor dealing with a GOP legislature, noting the turnaround from a state with a massive budget shortfall to being named the best-managed state in the nation.

But it was Warners inspirational theme that carried the night as he reached back to the ideals of the founder of the Democratic Party.

And on an electrifying night in Denver, Alexandrias Mark Warner got it right when he told the crowd, At our best, its not your lineage or last name that matters. Its not where you come from that counts – its where you want to go.