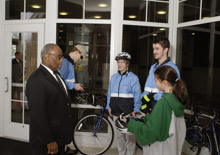 Representatives of Alexandria City Public Schools and the City of Alexandria welcomed eight Seattle students as they begun a 5,400-mile cross-country bicycle ride to raise awareness about the environment and climate change.

The high school and elementary students, accompanied by chaperones and a cameraman, arrived on bicycle on March 31, at T.C. Williams High School and met with Mayor William D. Euille, T.C. Williams Principal Mel Riddile, other city and ACPS officials and T.C. Williams students. The cyclists discussed climate issues and their event, “An Inconvenient Ride,” and learned more about the “green” features of Alexandria and T.C. Williams. They also participated in a ceremonial medallion presentation and toured the school’s roof garden.

The students’ visit was filmed for a documentary about their ride, which will take them across 5,400 miles and through more than 500 cities, including 65 that have signed on to participate in Seattle Mayor Greg Nickels’ Climate Action initiative.

The students hope to feature the documentary at next year’s Sundance Film Festival. In each city, the students will meet with the mayor and other elected city officials to discuss the student environmental organization Project Earth Care and the importance of getting young people involved in protecting the environment.

Beginning in Washington, the route goes south through Virginia, the Carolinas, Georgia, Arkansas, Oklahoma, New Mexico, Arizona, Nevada, California, Oregon and western Washington. The students will arrive back in Seattle on April 22 (Earth Day) to kick off the “Global to Local” benefit to celebrate the environment.

More information about the bike ride and related events is available at the project Web site, www.inconvenientride.com.