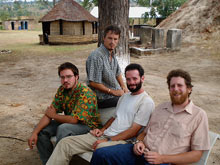 Chad Conaty returned home to Alexandria late last summer after spending two years in Zambia as a Peace Corps Volunteer. While it was hard to say goodbye to all the friends he had made in his African village, he was thrilled to be home again with family.

But Conaty returned home in the midst of a severe economic downturn, essentially unemployed and homeless.

Since September 2007, Conaty has gone through a string of temp jobs, including one with the Red Cross, and only recently landed a steady paycheck serving as the campaign manager of the Great American Bake Sale at Share Our Strength, a DC-based non-profit.

And until just a few months ago, the thirty-something Alexandria native was still living with his parents.

Before joining the Peace Corps, Conaty was selling more top-tier office furniture to the United States Government than anyone in his company at the time, a real go-getter.  “I’ve never been motivated by money,” Conaty said. “But that’s what you do when you get out of college: you get a job.”

In 1998, Conaty graduated with a degree in Forestry, Parks & Recreation from West Virginia University.

Volunteering with the Peace Corps had always been something he had wanted to do, and ultimately, he saw the Peace Corps as a way to get back to what he loved: the outdoors and helping people. He also wanted a fresh start at a more personally-fulfilling career.

“Selling office furniture, there’s no challenge in it. I was never satisfied with doing that, so after seven or eight years of procrastinating,” he laughs, “I signed up.” The Peace Corps has trained and dispersed nearly 200,000 cultural ambassadors to 139 countries since its inception in 1961, and in 2007, it had nearly 8100 volunteers spread across 74 countries.

Prior to leaving the United States, volunteers spend a few days at a cultural sensitivity staging center. They then spend the next two to three months at a community-based training center in their host countries, often living with a local family as a way to become totally immersed in the local customs and to reinforce the intensive language lessons they attend four to five hours each day. It is during this time that they also receive their job-specific technical training before being cut loose to fend for themselves.

“There’s almost no supervision once you actually get to your village,” Conaty said. “I was supposed to work closely with my local forestry counterpart, but he only visited me twice the whole time I was there. I built my own relationships with locals and developed my own projects.”

Conaty served in Chiwanga Village in the eastern province of Katete, Zambia, about 20 miles from western Mozambique. He was the first two-year Peace Corps Volunteer to serve in the area, and his supervisor was over 700 kilometers away.

Lack of supervision aside, Conaty had more immediate concerns to deal with. He lived in a leaky, grass-thatch hut with a hard-tamped dirt floor and had to sleep under a mosquito net every night. Mice, considered a delicacy by the villagers, once ate through his radio antenna cable, and the nearest available water was half-a-mile away.

“Some volunteers I knew would retreat into their houses or huts or whatever and not come out for days at a time,” Conaty said about the impact the living conditions and isolation could have on Peace Corps volunteers.  “But that’s what I signed up for,” Conaty said. “I didn’t care where the Peace Corps sent me or what they had me doing. I knew what I wanted out of the experience and all I could think was ‘Wow. I’m in Africa'”

Dr. Alan Guskin, former president of Antioch University, echoes this sentiment. Guskin is widely credited with helping found the Peace Corps and was also among the first wave of volunteers.

“In those early days, there was a sense of being pioneers and excitement. I don’t remember having any feeling of ‘How the hell did I get here?'”, Dr. Guskin said. “We wanted to be part of the culture, and most of us, after a number of months, felt, for the most part, as if we belonged.”

As with their in-country service, however, Return Peace Corps Volunteers generally are left to their own devices when it comes to transitioning from being a volunteer to living in the “real world” of jobs and bills. “Being in the Peace Corps is all about self-motivation,” Conaty said. “But so is life.”

Returned Volunteer Services, headquartered in the District, is tasked with helping volunteers “successfully transition” from their time in the Peace Corps to “life and work” Statesdide. Mostly, though, RVS is geared toward helping RPCVs find jobs.

It publishes an online jobs bulletin, hosts career events, offers monthly resum reviews and various other employment-related services.  Returning Peace Corps volunteers are also eligible for certain student loan deferments and debt cancellations, and are given noncompetitive hiring consideration for federal government jobs for one year upon their return.

But whereas Conaty thrived on building networks virtually out of thin air in Zambia, he seems to have struggled somewhat in capitalizing on those already established here at home. He said he attended two career fairs with prospective employers from government, non-government, as well as international development sectors, but found the whole process frustrating.

“Maybe I didn’t try hard enough, but I felt like, with my sales and Peace Corps experience, I could get a job a lot quicker than I did,” he said. “I went from doing so many cool things in Zambia to not even getting an email back from a prospective employer for a position I was over-qualified for.”

Even after finally landing the job with Share our Strength and moving out of his parent’s condo, however, Conaty still said he feels as if something’s missing.

“This job definitely makes a difference,” Conaty said, “but I stare at a computer screen all day. It’s just not the same kind of connection as being on the ground. In Zambia, the sense of community and purpose I had living and working there…it had never been stronger.”

This sense of community and purpose ultimately led Conaty to apply to the Public Sector MBA program at the University of Birmingham in the United Kingdom. He has just been accepted and will be moving there sometime in August or September.

“I think the program is the only one of its kind in the world,” Conaty says. “It focuses on non-profits/non-governmental organizations and how they relate/interact with transitional and developing countries trying to get out of debt and poverty.”

Poverty is not merely a hot-button topic to Conaty. It is an experience he will carry with him the rest of his life.

Like most returning volunteers, he has scores of stories to tell, but one is particularly arresting. After spending the 2006 Holidays with his family in Alexandria, Conaty returned to find a Zambian village in bad shape.  “There was a drought on and before I even left to go back home there’d been food shortages. When I got back to the village, people were resorting to digging up roots and hunting mice,” he said.

Conaty almost spoke up to put a stop to it at one point, but restrained himself. “It was just one more reminder,” he said, “that these people survive hand to mouth. I’d never witnessed anything like this in my life.”

And so between memory and action, a life can perhaps become extraordinary.