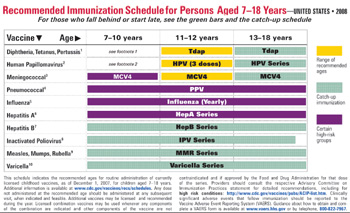 Connor Gallagher is a rising sophomore at T.C. Williams High School. Accordng to his mother, Denise, his immunizations are up to date. We got a letter from the school telling us the status of his shots and what he needed before school started, she said.

A review of records of 9th graders is automatic in Alexandria for rising 10th graders, said Robin Wallin, RN, MSN, Nurse Coordinator for the Alexandria City Public Schools (ACPS). Our resources in Alexandria are remarkable. Wallin said. Six years ago, we started a health fair that is held the Wednesday before school starts where we see between 70 and 140 kids each year. The benefit of the health fair is that we dont have students starting school who have not started an immunization program.

Keeping up with immunization requirements has become increasingly complicated. When vaccines were first required, in the 1950s, the only vaccines given were for diphtheria, tetanus, smallpox and pertussis (whooping cough). Today, by the time most children have reached the age of two, they may have received as many as 20 vaccines protecting them from a long list of dangerous diseases. Parents no longer have to see a child with measles suffer brain damage, or a child with tetanus whose muscles tighten so they cannot swallow.

No vaccine is 100 percent safe or 100 percent effective and there are risks and side effects. Before vaccines were available, people were more afraid of the diseases they prevented than of the possible side effects of the vaccines. Because of vaccines, smallpox has been eradicated and polio has been eliminated in much of the world. Mumps and chickenpox are also largely under control.

Strong Program Necessary
Many diseases we vaccinate against still exist. In 2004, 25,827 cases of pertussis were reported in the United States, with 34 percent of the cases occurring in 11 to 18 year olds, according to the Centers for Disease Control and Prevention. This is the highest number since the 1950s.

Wallin said that there is a need from a public safety position for a strong immunization program, pointing out that we have students from more than 80 countries here in classes and all of them need to comply with vaccine requirements.  With vaccines, the emphasis is placed on herd immunity, according to Wallin. Because no vaccine is 100 percent effective, the more children that are not immunized becomes a concern,  she added. There are always students who are not able to be vaccinated; the herd immunity helps protect them. According to Virginia State law, parents may opt out of vaccines for religious reasons; one to two students per school each year do so.

With new vaccines come concerns about the risks and safety. Safety concerns led to removing Thimerosl, a mercury-containing preservative, from routinely recommended childhood vaccines. Gardasil, the HPV vaccine recommended for administration to 11-12 year-old females has been reported to have had some serious side effects. The Centers for Disease Controls study on the side effects of Gardasil is due to be released in October.

I believe this vaccine is safe. Parents look at HPV as sexually transmitted but it can be transmitted with close skin-to-skin contact, Wallin said. She also added that the younger the girl is, the greater the immune response created by the vaccine.

This is the first vaccine we have that prevents cancer, she said. Why Wait?

Free childrens immunizations are held at the Alexandria Health Department, 4480 King Street, from 1 to 6 p.m. on Mondays, from 1 to 4 p.m. on Tuesdays, and from 8 to 11 a.m. on Wednesdays. The ACPS Health Fair is Wednesday, Aug. 27,  from 9 a.m. to 2 p.m. at the James K. Polk Elementary School. Any K-5 ACPS student without access to medical care who needs a physical exam, immunizations or a TB skin test should attend. There is no charge.