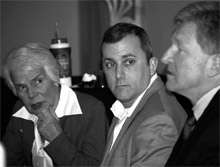 Andy Rooney and the NFL playoffs may have been playing on TV at home, but the ornate lecture hall of the Lyceum was about as packed as an Iowa caucus room Sunday evening as three Richmond-bound legislators attended a town hall-styled meeting for their constituents.

The timing of the Alexandria Democratic Committee’s annual sound-off with local members of the Virginia House and Senate coincided with the commencement of a special 60-day legislative session in Richmond.

The legislators mingled with attendees before making their statements and taking questions from the audience. By the next day, most were off to Richmond to take up residence there as citizen-lawmakers.

Virginia’s House of Delegates is considered the oldest continuous legislative body in the New World, having been formed as the House of Burgesses at Jamestown in 1619. Since 1788, the House and Senate have met on opposite wings of Virginia’s Capitol Building, designed by Thomas Jefferson. The Capitol was closed for most of 2006 due to renovations, but last year’s completion of those renovations prompted  the lawmakers to encourage Sunday’s attendees to visit.

Republicans took control of the traditionally Democratic House for the first time since Reconstruction in 1999. However, the Democrats began making a comeback under the leadership of Governors Mark Warner and Tim Kaine, picking up six seats during Warner’s term in office (2002-2006), and one in a special election at the start of Kaine’s term.

Democrats believe in providing Virginians the tools they need to reach their God-given potential,” said Del. Moran in his opening remarks. To that end, Moran is making pre-K education one of his highest legislative priorities, as well as repealing the almost universally dreaded abusive driver fees and retrieving two districts he lost because of redistricting by Republicans.

Del. Ebbins top goals when the House convenes on Jan. 8 include transit improvements, pedestrian crosswalks and calling for stricter penalties on the abuse and neglect of Virginia’s elderly.

Sen. Ticer, who was serenaded by her fellow lawmakers with Happy Birthday,” has reason to celebrate. Democratic gains in the Senate (Democrats now have a 21 to 19 majority)  have positioned her as the new chair of the agriculture, natural resources, and conservation committees. Ticer said she will be wielding her new power to focus on pollution caused by uranium mining and agricultural runoff.

Ticer said she is delighted with the number of women now wielding chairmanships in the Senate, because of Democratic victories last fall. Now the committees will look like the face of Virginia,” she said.

Audience members sounded off during the meeting. John Eisenhour of Alexandria, who attended with his wife Dottie, said he is most concerned with the new regional transportation taxes. Max Stolper of Alexandria said he’s troubled with the relaxed gun laws.

The presidential election cycle was not far from the minds of the 75 people in attendance, with attendees sporting candidate t-shirts and passing around buttons and  flyers for upcoming events.

Members like Moran said they’re keeping their powder dry and have chosen not to make early endorsements, as Gov. Tim Kaine (D) last February, when he endorsed Democratic front-runner Barack Obama.  For now, members will be appropriating Kaines biannual budget and other legislative matters.

The session will likely around March 8, and Democratic Committee Chair Susan Kellom said she’s planning a wrap-up legislative briefing around then.