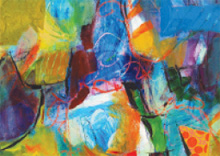 In what is fast becoming a signature event for the City of Alexandria, the Festival of the Arts returns to King Street for the sixth year this weekend, transforming historic Old Town into a concentrated bustle of events and excitement during the two-day extravaganza.

Over 200 of the nations most talented artists will collectively display over $15 million in various art mediums, including paintings, sculptures, photography, glass, ceramics, jewelry and mixed media.

Ranked as one of the top 100 art fairs in the country by Sunshine Artist magazine, the Alexandria festival is a juried show in which all of the local and national artists have been hand-selected from over a thousand applications.

Among those making the cut this year are local Torpedo Factory artisans Ann Barbieri, Jennifer Hatfield and David Cochran, who has been an exhibitor at the show since 2002.

I was here at the beginning, and the crowds get larger every year because the show has such a strong reputation, said Cochran, whose permanent studio is on the third floor of the Torpedo Factory.

Barbieri, another third-floor studio artist, is participating in her first hometown show.

I had been hearing from friends every year that this was such a great festival, said Barbieri, who specializes in acrylics and collage. When I noticed last year that no one was coming into the Torpedo Factory, I decided to apply to be an exhibitor.

The Torpedo Factory Art Center decided to supplement the outdoor show with its own Art Activated weekend of events this year, with hands-on demonstrations that will include pottery, enameling, printmaking and fiber art activities.

Its good for the Torpedo Factory artists to build a relationship with the festival, added Cochran, who specializes in unique, casual family portraits. Its interesting for the public to meet and talk with the artists.

Historic Christ Church will again open its grounds to provide refreshments and a family-friendly respite for festival attendees, with activities including face painting, bead stringing and a moon bounce.

Howard Alan, who produces more than 40 juried art shows throughout the country each year, had the idea to bring an art show to Alexandria six years ago.

We brought the idea to the Convention and Visitors Bureau when I saw that so many attendees of our other shows were from this area, said Alan, who manages Howard Alan Events with his wife Debbie. Alexandrians are knowledgeable and very appreciative of art, so this was a good fit.

Stephanie Brown, president and CEO of the Alexandria Convention and Visitors Association, said that the festival brings in anywhere from 30,000 to 40,000 visitors to the city over the weekend.

The festival has been very positive for the city, Brown said. While it has not been scientifically researched, observations during the festival show that restaurants and shops do very well during the show.

Most importantly, Brown continued, we are introducing tens of thousands of people to Alexandria in the hopes that they will return again, staying longer, doing more and spending more with the local businesses.

When asked if the declining economy would affect revenues from the show, Alan was optimistic based on sales from his other shows.

People are not buying a new car or taking a big vacation, but they are still treating themselves, said Alan, who points out that everything at the show is hand made by American artists. From $30 earrings to a $50,000 piece of sculpture, there is something for everyone at the show.