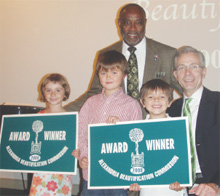 With entertainment provided by an accomplished string trio from T.C. Williams, guests and winners were greeted warmly by the Alexandria Beautification Committee, Mayor Bill Euille and Councilmen Paul Smedburg and Timothy Lovain.

The 2008 awards were given to 55 families, businesses, restaurants and one school: Jefferson-Houston Elementary School.   Guests were treated to huge, spectacular splashes of colorful photos as each winning yard or business establishments exterior landscaping was projected on to one of the reception rooms walls.  Award-winning gardens came from every corner of the city from the front yards of modest ranch houses as well as split levels, brick colonials, palatial traditional homes and diverse businesses including a McDonalds on Glebe Road.

The annual competition is open to any residence, commercial establishment, public building, school, church and service areas such as traffic medians and neighborhood common gardens. The judging of the entrants is limited to space on any property visible from the public right-of-way, according to Maria Johnston, the chair of the Alexandria Beautification Commission.

The committee selects the winners by considering interesting plant colors, textures and forms, good proportion, creative landscaping accents and elements, excellent maintenance, overall appearance in relation to the surrounding neighborhood and noticeable improvement, according to Johnston.

This year, Jefferson-Houston Elementary School was nominated several times and was selected as a winner for its nature mural depicting Virginias flora and fauna on the playground side of the building, which also faces North West Street.  Principal Kimberly Graves and the city dedicated the nature mural almost one year ago.

The mural at Jefferson Houston School is not simply pleasing to the eye, but it incorporates the elements of what students are required to know for the Virginia Standards of Learning tests and is intended to be a resource. After being selected in a citywide competition, Alexandria artist Ashley Spencer painted the mural panels over the course of the summer of 2007 with her interns:  Pete Winslow, a freshman at Carnegie Mellon University, and his sister, Jane Winslow, a sophomore at Tulane University.

The Jefferson Houston teaching mural uses the dogwood, Virginias state tree, to show seasonal change. Each seasonal panel shows how the dogwood and plants and animals grow or alter with each seasonal change. Students can observe the same wildlife around the school and in their communities as painted in the mural, states Wendy Sparrow, who facilitates the childrens gardens and additional playground landscaping for the Alexandria Public School System.

Photos of the winning entries will soon be available online at www.alexandriava.gov.