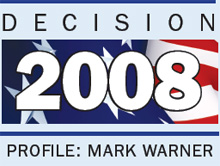 Former Virginia Governor Mark Warner (D) sometimes stumbles when he speaks, his blatant excitement for political discussion outrunning his voice box. Often, the Indianapolis-born Alexandrian running for Senate must take a breath to regain control of his tongue.

His ability to venture full speed into talking points invokes Warners experience as a businessman and politician. He has taken risks on the business side, charging into his first two moneymaking ventures only to fail before succeeding in the cellular telephone industry. Likewise, when Warner talks about passing past and future legislation, timidity is and was not an option.

The most important lessons in my life Ive learned from failures, Warner said. Too many people become risk-adverse and never try anything bold because of their fear of failure, and I dont think thats where you get things done.

Warner, 53, says he failed in his first year as Virginias governor, a spot he anchored from 2002 to 2006, before leaving office with an 80 percent approval rating. His first year in office was characterized by a mammoth budget crisis and a transportation referendum that went down the tubes, but also by politics as unusual. His claim to fame as a moderate Democrat has been based on his ability to reach across the aisle to Republicans. And the self-described radical centrist did so to help solve the budget dilemma Virginia faced in the past.

Born in 1954, Warner was somewhat interested in politics as a young man, old enough to be touched by the idealism of the 60s but not old enough to live it, he said. His dad was a Marine in World War II and he said his parents, though involved in the PTA and Boy Scouts, were not politically active. As a young man, Warner moved from Indiana to Illinois to Connecticut before settling in at George Washington University in the District.

After graduating GWU with a 4.0 grade point average as the first member of his family to matriculate college, Warner earned a law degree from Harvard. He had worked on the hill as an undergrad but he wanted to try law. He soon realized it was not for him.

It wasnt active enough, Warner said. It was more just kind of intellectual Harvard probably has a tendency to produce more folks that end up in corporate law than people who are going to court and saving lives.

Warner went on to work on Sen. Christopher Dodds (D-CT) staff in the early 80s before venturing into the cell phone business. After building up a base of support, especially in rural Virginia, Warner ran for Senate against Sen. John Warner (R-VA) in 1996, but lost, adding to his dive-in-and-learn-from-it attitude. After a governorship viewed widely as a success, Warner is running for Senate again, this time against Republican opponent and the governor that preceded him, Jim Gilmore (R). He hopes to build on his bipartisan reputation in an election year enveloped by the idea of party cooperation.

Currently, its also an election enveloped in an economic crisis; Warner says his past experience with Virginias budget gives him an edge.

I came [into the governorship] as the guy who was going to come in with a little more business mindset, Warner said. My predecessor couldnt even pass a budget with his own party, and there was such partisan bickering, you know, there was almost kind of a political exhaustion about fighting nothing was getting done. It ended up being a blessing, because it forced you to do things more creatively. It sounds trite, but politics as usual wasnt going to work.

As for the current financial doldrums being felt on Wall Street and on streets across the world, Warner said that yes, stricter oversight was necessary but also wondered where the leadership from the business community was leading up to the crisis. All markets develop patterns over time and show warning signs. Everyone the government regulators and Wall Street businesses ignored those signs, Warner said.

We have a regulatory establishment around financial institutions that was created in the depression, Warner said. And all of the barriers between different kinds of banks have disappeared. You had banks picking what regulator it wanted to go to so it could get the best deal. Instead of making good with their clients, Warner said, Wall Street was more concerned with next quarters profits.

Warner said the crisis occurred and the bailout was prolonged because too many people in Washington dont understand finance [and] cant read a budget sheet, which he believes, as a successful businessman, gives him an edge over his opponent. As governor, Warner put in to place long-term financial plans for government  (which he likened to Alexandrias planning that resulted in a positive economic position relative to the regions) while gaining cooperation from both parties.

In the normal ups and downs of an economy, what you always got to worry about is when times are good, dont overspend, Warner said. On the other side, you cant promise tons of tax cuts if youre assuming huge revenue growth forever.

Warner raised taxes as governor after pledging on the campaign trail that he would not, though he has claimed it was necessary because of the state of the economy Gilmore left behind. Though he admitted the current economic bailout package is not perfect, he supported it as a necessary way out of the current turmoil.

The economy will likely be the top priority if he is elected to the Senate, Warner said (Not just the nations economy. Virginias budget could be facing a budget shortfall of more than $2 billion.), but he would like to focus much of his attention on energy development. He said the country should not take an either-or approach to energy, referring to alternative energy production versus drilling for oil here at home.

Theres an opportunity here, I think, to create millions of jobs in the energy space, Warner said. Exhibiting his jump-right-in philosophy, Warner said he wants to invest in energy research and development instead of trying to pick the winners like the government did with corn-based ethanol. By investing in research, Warner hopes to influence policy platforms dedicated to alternative energy initiatives like promoting hybrid vehicles with high mileage-to-gallon ratios. He also indicated that the government could give a permanent tax credit to the development of wind and soil energy instead of oil-based energy.

Warner sees transportation as a major issue in Virginia as well. The states budget shortfall will hit transportation initiatives hard. Warner wants us to move toward higher mile-per-gallon cars, which is good for the environment, good to get us off foreign oil but not good in terms of funding our infrastructure. Nobodys going to suggest dramatically raising the gas tax, so how we finance transportation is going to have to be a fresh look, whether its tolls or whether its public/private partnerships.

On Iraq, Warner said Iraqis should take more responsibility for their country. I think youve got to go to the Iraqis and say, Youre sitting on $70 billion of oil profits. Its time for you to take more responsibility for your country, so that America can utilize the money for energy development at home, he said. Warner also said he favors putting additional troops into Afghanistan.

Warners views are not stark when compared with traditional Democratic and Republican values; they seem to be elements from each end of the spectrum immersed in his policies and philosophies. He sees health care as both a moral issue and an issue of competitiveness, indicating that jobs go across seas because of expensive American coverage. He thinks education needs to produce a highly educated workforce to compete with the rest of the world. The fastest train in the world is in Shanghai rather than America, Warner said. [That] doesnt make me happy.

Perhaps the views emitted from this radical centrist are the reasons he was tapped as the keynote speaker at the Democratic National Convention in August. Barack Obamas (D-Ill.) campaign
may have had one agenda, but Warner says he acted as himself.

I knew going in that there would be some folks who wouldnt like what I was going to say because Im not just going to go up there and bash the other side, Warner said. When I made that speech it wasnt about trying to talk to the 18,000 people in the hall, it was the millions of people at home who were still trying to decide. I was trying to make the case for Barack Obama and for the country on how we get things fixed. Its not by trying to get folks simply riled up on the convention floor, you know, booing your opponents. That doesnt help.