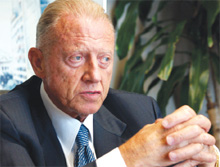 IDI Group, the company interested in redeveloping the Hunting Towers and Hunting Terrace residential complexes on South Washington Street, has been lobbying the city for more than two years to do so. City officials have resisted the development so far, citing the building guidelines namely height restrictions of Old Towns historical district.

On Wednesday, IDI presented an alternative Hunting Terrace project to the Board of Architectural Review that could materialize should the Planning Commission deny IDIs original bid, which is up for decision in October.  The company hopes to gain a demolition permit for the structures on the lot and build high-end condos as a backup plan.

IDIs main goal all along has been to redevelop Hunting Towers, the 530-unit high-rise apartment buildings next to the Woodrow Wilson Bridge, with affordable housing units. To do that, the company has stated, it needs to raise about $20 million by building and renting out a 14-story structure at Hunting Terrace, the low-rise apartment complex sitting across the street. The height limit for that section of Old Town is five stories, according to the Washington Street Guidelines.

This new project is our plan B, said John Cecchi, who heads IDIs Hunting Terrace project. Were playing by the rules with this.

The BAR seemed to think so as well. While there was no official vote, IDI was seeking comments on its contingency project and received mostly positive ones. The new by-right plan does not exceed the Washington Street Guidelines or other city restrictions. The presented drawings depict four five-story buildings with a total of 322 high-end condo units on the west side of South Washington Street.  Each building has a faade to resemble unique townhouses, fitting in with the areas historical streetscape.

I think theres plenty of variation with these buildings, BAR member Lynn Neihardt said. To me, this complies with the guidelines. Im very happy with it.

But while the BAR favored the initial design, IDI sees it as a last resort. The company bought the 6.78-acre plot complete with five low-rise structures from the Virginia Department of Transportation in 2006. There were originally eight structures, but VDOT demolished three to make way for the Woodrow Wilson Bridge project. The buildings have been vacant since September of 2007, and both the property and IDI have hung in limbo ever since.

Headed by prominent developer Giuseppe Cecchi, the company believes it is in the citys best interest to erect the 14-story apartments to produce the affordable workforce housing needed in a city where most municipal workers cannot afford to live.

The stalemate led IDI to submit two separate razing applications for the same property, one that plays by the rules and one that requires bending them. The simultaneous applications are a rarity for the BAR to take under consideration.

Whats unusual is this taking two-and-a-half years to get done, IDI owner Giuseppi Cecchi said after the meeting.

Both father and son said that if the city rejects the 14-story development, they would go forward with the five-story buildings and leave Hunting Towers, afforadable housing and all. Its fate would be uncertain, John Cecchi said.

The stalemate stems from the definition of affordable housing: The city lacks it, but under the original Hunting Towers proposal, present residents would only be able to stay if they bought their unit.

Under IDIs proposal, tenants at Hunting Towers would be offered to buy their apartments for a price falling into a three-tiered payment plan: Tenants who established residency in the building before Dec. 15, 2005 would pay the least $125,000 to $240,000, depending on the units size; those arriving later and the City Workforce belong to the middle tier ($140,000 to $330,000); and the Public Workforce would pay anywhere from $145,000 to $355,000 to purchase a unit.

Until IDI goes in front of the Planning Commission next month, the fate of both Hunting Towers and Hunting Terrace will remain undecided.