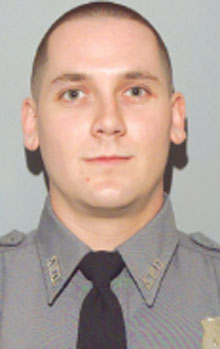 Officer Kyle Russel of the Alexandria Police Department was en route to an assignment a little before 8 p.m. Tuesday when he pulled over a silver Lexus sport utility vehicle driving erratically on I 395 near Glebe Road. Upon approaching the vehicle, the driver shot Russel, 26, in the chest with a .45 caliber handgun at point-blank range. The bullet hit the Officers bulletproof vest and he is expected to make a full recovery.

After shooting Russel, the suspect, Robert K. Hui, 22, continued driving on the highway toward Washington, D.C. The vehicle was later found on the left shoulder of the road, just south of the 14th Street Bridge with Hui deceased inside. Police officials said he took his own life with a self-inflicted gunshot wound to the head from the same gun he used to shoot Russel.

Huis wife Sarah Tredop, 19, was later found dead in a closet at their apartment on Columbia Pike in Arlington. She suffered from multiple gunshot wounds. Hui is suspected of killing her, Arlington County Police authorities said.

Russel was taken to INOVA Fairfax Hospital after the incident.

This is not rocket science, Alexandria Police Chief David Baker said at a press conference Wednesday. This officer was saved by the vest.

Baker was responding to reporters inquiring whether ballistic vests are required on the Alexandria Police force. They are optional, but Baker said he was 90 percent sure they will be mandatory after the incident. I have no reservations looking at mandatory vest rules in Alexandria, he said.

Huis vehicle was likely in motion when he ended his life, according to Baker. Two Alexandria police officers responded to the second crime scene near D.C., where no gunshots were fired. Baker said that a helicopter was brought to the scene to use infrared technology that informed police Hui was dead inside his vehicle and therefore not a threat.

Detectives have not discussed if they found any [drug] paraphernalia, said Detective Crystal Nosal, an Arlington County Police spokeswoman. Nosal also said that she did not believe Hui had been arrested in Arlington before, because he did not have a mug photo on file.

Police units responded to the first scene immediately in the area of Glebe Road, according to a press release from the Arlington County Police Department.

I was headed down to Giant and suddenly police cars were swarming all around me, said Arlington resident Casey Weir, who witnessed some of the hubbub nearby. You could tell they were looking for someone because they were all scattered out and confused, and when I walked into Giant, two cops were scanning the aisles. One of them waited by the doors and wouldnt move his hand away from the gun on his side.

Baker said he was pleased with the restraint that Russel, a threeand-a-half year veteran, showed by withholding gunfire in a high-traffic area. After he was shot, he did an excellent job of getting out of harms way, Baker said.

Im reluctant to say it was a routine traffic stop, Baker said. Because quite frankly, in this day and age, nothing seems to be routine anymore.

Russel was training a new officer at the time, who had approached the vehicle as well. He was also wearing a bulletproof vest.

Between the three crime scenes, Alexandria, Arlington, Fairfax, Pentagon and Virginia State Police responded in what Baker said was seamless communication between the regional police departments.