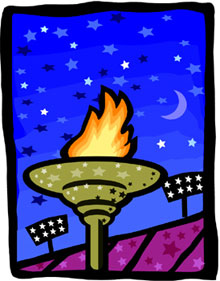 China’s government, those Communist mandarins in their thousand dollar Armani suits, have added bulldozing to the list of Olympic events this summer.

To make way for a spanking new park near Olympic stadium in Beijing, the People’s Government is evicting more than 500 villagers from their homes.  The simple brick houses are an eyesore, wholly out of character with the glitz and glam of the New China’s opulent Olympic display.

A stone’s throw from the home sites being bulldozed, the government has already opened Forest Park, double the size of New York’s Central Park.  The poor residents of what used to be known as Yangshan Village are being hauled away like so much trash to make way for still another park, this one with a luxurious marbled entrance.  Villagers expect that as soon as the Olympic flag is lowered, the new Yangshan Park will be bulldozed again, this time to make way for a few hundred pricey condos.

The government’s bulldozing squad, contracted to a filthy-rich Beijing realtor, claims villagers have been given “adequate compensation.”  Sure.  The same Realtor is selling his nearby condos to the newly well-heeled Chinese bourgeoisie for over $250 per square foot.  By contrast, village residents are being offered a princely sum of $57 for their modest homes, built on land that has been in the family for untold generations.

Pressure is mounting on President Bush to boycott the Olympic opening ceremonies to protest China’s general bad behavior of late.  The fire-breathing dragon has trampled Tibetans, toxified our toys, and even tinkered with our medicines.  Adding insult to injury, Chinese bigwigs failed to accomplish the one overarching objective they guaranteed the Olympic Site Selection Committee — protect the world’s athletes this summer from Beijing’s poisonous air.

So far, the leader of the Free World says he’s still going to Beijing this August.  Bush insists he will be more effective if he speaks to the Commie autocrats in private.  Staring into their eyes the way he did his old buddy, Vladimir Putin, Bush believes presidential eyeballing will strike terror in the hearts of these Beijing bullies.

After this behind the scenes eyeball thrashing by Bush, we should expect the People’s Government to free Tibet, clean up their production lines, and restore to their rightful lands the poor villagers of Yangshan, right?  Jesus of Nazareth warned that the poor we will always have with us.  He neglected to warn us against rapacious realtors, their government goons, and lame lame-duck presidents.

I suppose we have no right to complain if China’s chickens have come home to roost.  Ever since Dick Nixon and his pal, uber-diplomat Herr Kissinger, re-established friendly relations with the Communist behemoth, we’ve been eagerly waiting for the Chinese to adopt Western ways.  Now they have.  The Shanghai skyline juts higher than midtown Manhattan, Beijing air makes LA smog smell positively healthy, and Chinese real estate moguls make Donald Trump look like Mother Teresa.