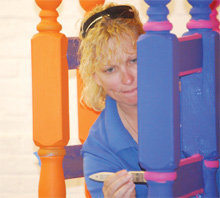 Stoic red brick watchtowers leer over the former Lorton prison site about 15 minutes south of Alexandria, at first glance evoking a scene from The Shawshank Redemption. But there is nothing confining about the 55-acre site that used to hold D.C.s criminals captive and put them to work. In fact, the walls that used to incarcerate its occupants now liberate them.

Symmetrical dormitory complexes and other buildings on the site have been transformed into the Workhouse Arts Center, a community of studios where more than 100 artists  many of them Alexandrians are already practicing their expertise and sharing it with others, be it ceramics, glass, theater or dance. No art form is off limits for the hub of creativity whose week-long grand opening kicks off this Friday.

Were all pinching ourselves, artist Chris Monette Appleton said as she hung paintings in her freshly painted studio. Appleton, who blames her diverse techniques and media on art ADD, was one of the first artists accepted to the Workhouse through a competition judged by a national panel of artists, gallery managers and art historians. Being part of an artist community is the number one thing on an artists list, she said.

Appleton and other artists came crawling out of our basements to take advantage of what she said is much needed studio space in an area that otherwise lacks artistic venues. Proponents of the prison-turned-muse hope it will enrich the area around it an area where residents used to worry about escaped prisoners, not running out of watercolors.

Caren Hearne taught theater in the areas public school system before coming to Workhouse to be the theater programs director. Her former job, she said, made her appreciate the new artist community as a teaching tool that can supplement the school systems art courses, which do not receive ample funding.

I really understand the need for our facility in this region, Hearne said. Schools dont have room for a lot of [art] programs everything that has to do with that side of the brain.

Hearne is working with local schools to put on a full-scale theater production. Education is a tenet of Workhouse Arts Center where more than 130 classes are offered to all ages in nine visual and performing arts disciplines. So, while artists are influenced by one another, they influence students as well, adding to the areas creative reservoir.

We have created a cultural center that includes both the visual and performing arts, showcases the history of the site, and provides a place of inspiration that will continue to enrich the metropolitan Washington region for years to come, said Alexandrian Tina Leone, CEO of the Lorton Arts Foundation, the organization that spearheaded the project after Fairfax County secured the deed to the former prison in 2002. However, the Foundation is responsible for funding all business and site improvements.

Fridays grand opening represents the completion of the projects first phase, including the adaptation of 10 historic buildings covering 79,000 square feet. This first wave of restored structures includes prison quarters that have been transformed into visual art and studios, galleries, classrooms, music rooms and administrative buildings. Eventually, the prisons former gymnasium will morph into a 300-seat theater and the cafeteria will transform into an events center that the public can also rent, holding up to 600 people. A 40-unit artist-in-residence colony will also be erected to provide artists with a live-work arrangement.

Many of the Lorton prisons buildings were originally built by its own prisoners, who made the bricks onsite. Famous for imprisoning leaders of the womens suffrage movement Lucy Burns and Helena Hill Weed, the prison is about to enter into its next chapter of sustainability with a nod to the past.

The yellow lines that used to restrict prisoners movement to a single-file line are still visible and will not be painted over though fading on the dormitory-turned studio floors. It is evident that the prisons next life will be a bit more colorful and unshackled than its last.

The grand opening events begin Sept. 19 and run through Sept. 27, offering a range of big-name celebrations including a performance by Tony-award winning singer and actress Barbara Cook, and an exhibition by New York artist Alex Beard, free art workshops, and a performance by concert pianist Pedja Muzijevic and the Washington Philharmonic. Tickets are required for some events.