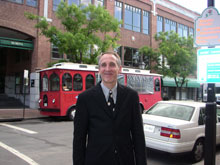 Whether selling a house in the current market, or intending to do so in the future, it might be a good idea to consult an architect when considering changes to existing space or additions to an historical space.  Old Town architect, Michael Wheeler, sees a change in the kind of living space we will be prizing in the years ahead.  One component of buyers considerations going forth may well center on energy efficiency, for example.

Wheeler sat on the Old Town Board of Architectural Review (BAR) for a dozen of the years he has been practicing in Alexandria.  He managed the restoration of the old slave quarters in Old Town, as well as designing La Madeleine Restaurant and the Hallmark card store on King Street.  In D.C., he designed the renovation of the private Georgetown Club to keep the space within its Victorian splendor.  He exudes a sense of calm, and a patient intellect, as he takes a practical look at smart growth practices.

He recalls the number of homeowners who appear before the Board seeking to replace the existing windows with newer material.  Wheeler cites the empirical evidence of the durability of the original materials over what many would choose to replace them with.  For historical properties, he recommends installing storm windows, to protect the original material.  Historically, Wheeler recalls that the window was seen as the soul of the house.  Quality windows are still available, including  Kolbe & Kolbe and Loewen, among others, for those seeking to renovate, he says.

Wheeler mulls over the options of retrofitting homes to be more energy efficient.  He suggests radiant heat is more efficient than forced air, while also more expensive to install.  Like so many energy-saving tools, it is a realization of savings over time.  He just installed radiant heat beneath the floors in his 1920s townhouse, and says he already feels a distinct difference in his utility bills.  Installing thermostats on each floor of a home are also useful energy savers, according to Wheeler.  There is no need to have the thermostat on the third floor at the same setting as the first floor, as heat rises.  By adjusting temperature settings on each floor, according to real need, the heating and cooling costs will be less.

Perhaps the most defining aspect of any home is the way in which it engages the senses.

The soul of a home lies in its character, and what it says of how the people who reside there go about life.  Wheeler recommends developing smaller spaces within a larger space, rather than oversized additions.  He encourages developing a sense of sound within a home, such as water cascading over an indoor rock garden, or down the surface of installed material along a wall.  He cites the numerous kinds of flooring that can affect the amount of noise from room to room, and level to level.  He ponders what smells are within a home perhaps an indoor garden that can be sealed off, but ventilate to the rooms, providing an early scent of spring?

Wheeler foresees a move of quality space utilization over quantity.  To define the warmth within a home, he counsels detail:  moldings, nooks, window seats, creating multi-use space where one can read and look out on something pleasing.  He advocates adding value within a home by building in bookcases, for example, or adding a skylight, putting in a window seat at the top of the stairs, so that upon looking up, the view is pleasing and inviting.  Rather than size, Wheeler looks to livability.

These are likely the values of the future, as energy costs cause many of us to scale down our space footprint.  Our homes are an extension of ourselves.  The quiet, calm Wheeler sees in his minds eye is the stuff of true, lasting quality, just like Old Town itself.