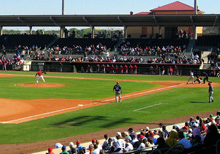 I needed a break from the Hillary/Barack story. So, I went to three spring training games in Florida over the weekend: Friday in Jupiter, Saturday in Kissimmee and yesterday in Viera.

All three featured the Washington Nationals, the team to which – as regular readers know – I am a credentialed reporter writing for the Mighty Alexandria Times.

The games themselves are barely tangential to the experience of being a reporter, rather than doing what a reporter is supposed to be doing – reporting on the game.

I have learned more about the nuances of the game by listening to the reporters who cover it every day six months a year than I had in the previous 45-or-so years of reading box scores.

And the reporters don’t understand baseball as well as the players or the coaches. There is a reason most NFL games have former players as the color commentators. They’ve done it, they’ve practiced it. They’ve studied it for decades and they know it better than even dedicated fans.

During my speech on Friday morning, there was a man in the audience who began to challenge me on something I had said regarding Hillary Rodham Clinton. We went back and forth for about 30 seconds and I said: Don’t start with me. I do this for a living.

It got a laugh from the audience, but the man understood he was not going to get ahead of me on either the facts or the theories which attend to the campaign of 2008.

Getting back to the three games I watched, spring training is a time of preparing for the veterans, learning for the rookies, and testing for those who are on the bubble of either making the opening day roster in Washington or one of the minor league levels.

These are young men in their 20’s for the most part. Kids. They make an enormous amount of money, but they have to perform every time out. Pitchers have to get hitters out. Hitters have to get on base. Success for one is failure for the other.

Most of us can (and probably do) coast through our jobs. We know how to do them and we mostly do them pretty well. Not outstanding, most days, but pretty well.

Professional performers have to do it, too. Lives don’t hang in the balance, but we’ve all been to a concert or a play when we knew the people on stage were calling it in. Do it too often and they find themselves playing 10 days at the Holiday Inn instead of one night at Yankee Stadium.

Quick anecdote which is covered fully in the Travelogues. A sand hill crane landed on the field yesterday and hung around for about three innings before it decided to move on. Reporters asked the pitcher about it, and then asked Manager Manny Acta.

Each said it was amusing but of no moment.