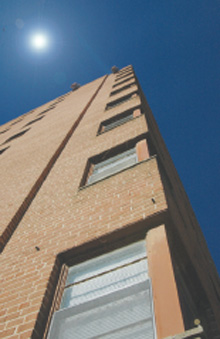 Development and perhaps workforce housing gave way to historical preservation last Saturday when the City Council voted against a proposal that would have allowed structures as tall as 14 stories to tower over Alexandrias southern gateway at Hunting Terrace along the Potomac.

The area was used by George Washington to travel from his Mount Vernon Estate to Old Town in the Eighteenth Century. Today, city guidelines prohibit construction that is contrary to the traditional historic faade of the city, including structures taller than five stories.

IDI, owned by prominent developer Giuseppe Cecchi, has owned Hunting Terrace for more than two years. Cecchi hoped to erect high rise condominiums there and use the revenue from the extra floors to redevelop Hunting Towers across the street, partially populating it with much-needed affordable housing for city employees and the public.

But IDI does not own Hunting Towers; the company planned to buy if from the Virginia Department of Transportation which bought the property to facilitate the Woodrow Wilson Bridge project pending Councils decision.

We cant commit ourselves to a plan that doesnt have everything tied down, Vice Mayor Del Pepper said. 2012 is really a long way off and a whole lot could happen. We cant commit the citys funds until we have everything really tied down. Pepper added that she was very mindful of Hunting Tower residents state of limbo.

One of the uncertainties with which officials grappled was what affordable housing really is, and what it will be in the future. Adding to the ambiguities, most residents would have to buy their units rather than rent them. According to the latest statistics from the Northern Virginia Association of Realtors, the median price for a condo unit is $307,500. Members of the city workforce would have paid as low as $225,000 but as high as $330,000 for a two-bedroom unit under IDIs proposal, making affordable housing probable but not guaranteed in the citys eyes.

One element of the argument not in question: the city lacks affordable housing. The vast majority of city employees cannot afford to live here and city staff reported that the city has less than 10,000 market-rate housing units left. Homeowners would have to make at least $100,000 a year to consider living in Alexandria.

Thats the city were becoming, Councilman Rob Krupicka said. Its happened kind of gradually and has been sped up over the last few years, but no one should have any uncertainty about that reality.

The issue proved to be a divisive one. The majority of IDIs supporters were current Hunting Tower residents who wore bright green Vote Yes stickers and spoke about their own uncertainties: The Commonwealth has been the Towers landlord since VDOT took the property by eminent domain in 2001 and many residents are frustrated with the Towers precariousness as well as with units in need of renovation.

Believe me, we residents at Hunting Towers are burned to the crisp, said a near-tears Ardith Dentzer of the Hunting Towers Residents Association. A self-described daughter of the American Revolution, Dentzer has been a fervid supporter of the Cecchi plan for years. Yes, battered and buffeted crispy critters is what we are after years and years and upheaval, she told the Council. Dentzer added that the fact that IDI does not yet own the Towers is a pathetic excuse for denial because, by law, VDOT must offer the property back to its original owner, Jack Kay, who is in a joint venture with IDI.

Supporters of the opposition sported red stickers reading Save Historic Alexandria. They stressed the importance of maintaining the historic vista for the tourism industry as well as for Alexandrias culture. One speaker said Alexandria would become the new Rosslyn if Council opened the door to such development.

Not only would the building destroy the visual approach to historic Alexandria from the south, said Bert Ely, who has lived and owned a business in the city since 1981. But Councils approval of this proposal would open the door to the destruction of the historic character of all of Old Town based on its low-lying buildings, a character which makes Old Town attractive to the tourists the city tries to attract.

The continuum of the controversy cruxes on the value of preserving history versus preserving and creating affordable housing. Though there are other plans for workforce housing in the future perhaps at Hunting Towers it is mutually exclusive to Alexandrias historical ambiance in this particular case.

Its been said these shouldnt have been poised as competing priorities, Councilman Ludwig Gaines said. But the fact of the matter is, when youre making a decision as all of us at the dais are, they absolutely are.

Cecchi said IDIs next move is to get the companys Hunting Terrace by-right plan, already seen by the Board of Architectural Review, through the citys bureaucracy. The proposal plays by the rules and asks for no exceptions in redeveloping IDI-owned Hunting Terrace, which has been vacant for more than a year.