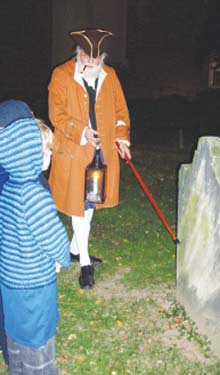 Who ya gonna call? Ghostbusters! Nope, not in this town. Not only is Alexandria not looking for any ghostbusters, tens of thousands of people from the far corners of the world actually seek out and enjoy the mostly tame stories of spirits, ghosts and other mysteries of Old Town.  For 23 years, Alexandria Colonial Tours has offered original ghost tours around Old Town, conducted by guides with lanterns and dressed in 18th-century garb. Every ghostly-guided stroll is filled with stories, legends, folklore and a few corny jokes. Naturally, the Ghost and Graveyard Tours are particularly popular around Halloween.

Wellington Watts, the owner of Alexandria Colonial Tours, started out as a tour guide for Doorways to Old Virginia. When owners Ed and Stella Michals decided to retire, Watts bought the business and changed the name to Alexandria Colonial Tours. Among a variety of numerous tours, Watts offers two one-hour, six-block Ghosts and Graveyards tours, both leaving from the Ramsay House Visitors Center on the corner of King and North Fairfax Streets.

The first of the popular ghost tours stops at Market Square then makes its way to the graveyard of the Old Presbyterian Meeting House, pausing intermittently for various stories of Old Town lore. The second ghost tour begins with a stroll across Market Square over to Gadsbys Tavern, purportedly home to two ghosts, then wanders up to the Christ Church graveyard.

Having been on both of Alexandrias ghost tours, it is common to look up at the second floor window in the candy store by the Visitors Center just in case the civil war era bride is looking out.  The sad story of her demise on her wedding day is touching; rumor has it that the bride ghost has made her presence known to tenants in the building in the past few years. Similarly, I cannot help but glance up at room 8 on the second floor of Gadsbys Tavern on the off chance that the mysterious stranger ghost lady is in the window gazing out. Many, however, recognize that the chances of me seeing her are slim since no one has seen her in over 150 years.

Other stories are definitely more disturbing and haunting.  The ice house on South Lee Street will never seem the same once you have been on the southern Ghosts and Graveyards tour and learn that it doubled as a morgue.  Nor will you ever think of George Washingtons physician, Dr. James Craig, in the same manner once you hear the story of one of his servants life-terminating errand. The gist of the story is that a young and reluctant servant girl was sent out on a dark and stormy night but did not quite make it back alive.

Sprinkled throughout the ghost tour narrations are lots of fun, little-known facts about Alexandria that even most life-long residents do not know.  Both tours do contain ghost stories that are likely to be frightening or upsetting to young children. However, on a recent tour, the guide adjusted his descriptions to make the stories less scary for the 8, 9 and 10-year olds in the group. If you have a group of 15 or more and would like your own dedicated tour guide with a less frightening version of the tales of spirits, then Watts and his guides are glad to accommodate if arrangements are made in advance.

There are potentially a multitude of ghosts scurrying around Old Town and the two Alexandria Ghost and Graveyards tours cannot possibly take in all of the houses that are said to have a friendly ghost or two hanging around. Additionally, many homeowners discourage attention because they do not want tourists knocking on their doors or peering in the windows. Or, perhaps the houses do not really have ghosts after all just kids who left the lights on or unexplained squeaking floorboards or items moved by the wind. Who really knows?

As a guide, Watts says that he enjoys telling visitors about the history of Alexandria and the ghosts that are said to make their presence known or even appear around Old Town. However, he did add, I am not sure if I believe in ghosts, but I sure like telling the stories.