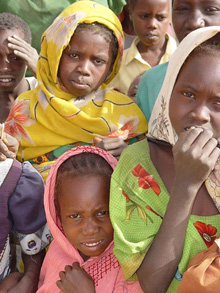 RICHMOND The General Assembly doesnt usually delve into international issues, but the Virginia Senate recently did: It passed legislation requiring the Virginia Retirement System to sell off its investments in companies whose business practices, according to human rights activists, support the genocide in Darfur.

However, a committee in the House of Delegates proceeded to kill Senate Bill 87 for the 2008 legislative session. Sen. Ken Cuccinelli (R-Fairfax), who carried the bill, has vowed to submit the legislation again next year.

One thing we can do is remove our investments from our retirement system to make it less economically viable for companies to invest in Sudan, Cuccinelli said. On a philosophical level, we should do something and it is the only thing we can do.

The Senate passed SB 87 on a 39-0 vote on Jan. 25. In the House, the legislation was referred to the Appropriations Committee. On Feb. 19, that panel assigned the bill to its Compensation and Retirement Subcommittee. The subcommittee failed to act on the proposal before the regular session ended Saturday. (Lawmakers agreed to meet for three more days to finish work on the state budget.)

Both bills would have required the Virginia Retirement System, under certain circumstances, to divest itself of investments in companies meeting certain criteria gauged to be related to the genocide in the Darfur region of Sudan, according to summaries by the Division of Legislative Services, the General Assemblys staff. VRS owns about $51 million in stock in such companies.

Cuccinelli said he was encouraged to find many state lawmakers in support of SB 87 and HB 556 even though they did not pass. In 2007, his divestment bill cleared the Senate but was watered down in the House, and the two chambers couldnt reach an agreement before adjournment.

The vote last year and the support we got this year indicated strong support for the Sudan bills, and I was very grateful for that, Cuccinelli said. I dont think its at a standstill.

But the senator said the assembly has been struggling with state budget problems and that made it hard to get traction on an issue like Darfur. Obviously we have problems on the House Appropriations Committee, he said.

One of the hardest tasks is convincing legislators that measures like SB 87 will help stop the genocide, Cuccinelli said. He said that will be his focus next year: I need to go show them why it will help affect genocide. But that is a tough thing to do.

The U.S. Congress and the Bush administration are convinced that the situation in Darfur is dire and that divestment is warranted.

Darfur is a Texas-sized region of western Sudan, a country in northeast Africa. Since 2003, Darfur residents have been attacked by rebel militias called Janjaweed (loosely translated as devil on horseback). They are infamous for using murder, rape and livestock destruction in terrorizing and displacing civilians in more than half of Darfurs villages.

In 2004, Congress and President Bush officially declared the situation in Darfur as genocide. U.S. officials and human rights activists say the Sudanese government has provided money and assistance to the Janjaweed and has participated in joint attacks on Darfur residents.

The bill said Virginia should use its financial resources to address the situation by ending its investments in entities that provide significant practical support for genocide, including certain non-United States companies presently doing business in Sudan.

The Sudan Divestment Task Force, a nonprofit human rights group, has identified dozens of companies that support the Sudanese government. The Virginia Retirement System owns $51 million in stock in 10 of those companies, according to an analysis of SB 87 by the Division of Legislative Services.

The divisions impact statement said those investments earned a return of 90 percent last year, substantially outperforming other public equities as a class. Selling the stock and buying Sudan-free replacements would cost $900,000 to $2.7 million, the analysis said.

The retirement systems board of trustees did not take a formal position on the legislation proposed by Cuccinelli and Valentine. However, according to the legislative staffs impact statement, the VRS board wishes to convey a number of concerns about divestment legislation.

One concern was that the legislation would require VRS to sell profitable investments. The VRS board said its investment decisions should be based on maximizing financial returns.

Legislative restrictions proposed in this bill, while affecting only a small slice of the VRS Trust Fund, could open the door to further restrictions aimed at addressing other pressing political issues such as terrorism, the board said, according to the impact statement.

The board said it has taken steps short of divestment. For example, it has supported well-written shareholder proposals that call for offending companies to terminate business operations in Sudan.

Opponents of SB 87 said the bill wouldnt have made a difference in Sudan.

Pulling investments out of Darfur is so far removed from the guy on the ground trying to scratch out a living, said Delegate Riley E. Ingram, R-Hopewell. He was present when the House Appropriations subcommittee tabled the bill.

Ingram says the General Assembly should not be making decisions on whether to limit retirement investments. Rather, that responsibility should be in the hands of the VRS trustees.

The bill would make it a law to sever all funds for any company that does business with Sudan, Ingram said. Pulling investments out of Sudan will only make things worse. If you take away all that money, youre talking about a real genocide.

He said that similar efforts have already caused nine companies to withdraw or substantially alter their policies in Sudan. The results are real, and the more states and investors that join this campaign, the more effective the pressures on these companies will be.

The Sudan Divestment Task Force is part of the Genocide Intervention Network. The task force has launched a worldwide campaign to persuade governments, foundations and businesses to stop investing in companies that support the Sudanese government.

The big disappointment with the legislation is that the House of Delegates showed an unwillingness to join dozens of other states who are taking action to end the genocide in Darfur, Croes said. This is an action that can bring about serious change to the worlds worst humanitarian crisis at virtually no cost to the state.