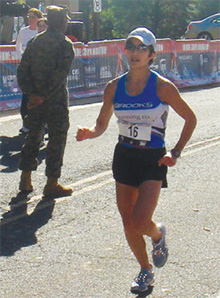 Some will do it for fitness, some for charity. Others do it purely for bragging rights. And believe it or not, some will actually do it for fun, as nearly 1,000 Alexandria residents will take to the streets this weekend in the 33rd Annual Marine Corps Marathon.

Alexandria is a great running community, said George Buckheight, a trainer at Pacers running store. We had the top two women in last years race and I expect we can sweep again this year.

Pacers is one of several running stores that fields a team for the 26.2-mile race, with about 100 participants running with Pacers-Brooks jerseys this year.

But there is no need for speed to be a part of the Pacers team. We have everyone from beginners to intermediate, but we have an especially strong elite womens squad, said Buckheight, who trained Del Ray resident and rookie marathoner Lisa Thomas to a second-place showing in last years race.

Thomas went on to compete in the Olympic Trials in April, which were held for the first time as part of an existing marathon.

Boston was an amazing experience, even though I didnt run as well as I hoped, said the effervescent Thomas, who will be watching this years marathon from the sidelines.

The timing isnt right for me to run this year, laughed Thomas, who is five months pregnant with her second child.

Over 70 local runners gathered outside the Pacers store on King Street Tuesday evening for one of their regular Fun Runs as well as to warm up for Sundays race. Everyone from elite runners to walkers gather for the thrice-weekly walk/runs led by Sonya Jarboe and Joe Schultz.

Weve had over 1,900 different people take part since we began the runs, said Pacers director of events Kathy Dalby. Weve been a family-owned and community-based business for 16 years now, and we want to train people and show them how to continue a healthy lifestyle.

Thomas believes so strongly in what Pacers does for the community that she left running for a different team to run for Pacers. They have the best programs and clinics for local runners. There is something every week, said Thomas, who frequents the Old Town store for running gear. I dont know of any other running store that does that.

With 30,000 runners scheduled to run on Sunday, 6,619 are from Virginia. Not included in those totals are the approximately 2,000 kids scheduled to run in the MCM Healthy Kids Fun Run, a one-mile just-for-fun event for children ages 6-13 that will take place Saturday in the Pentagons parking lot.

The kids are really looking forward to the race, said Becca Brocato, a parent who is coordinating a group of 45 children from Lyles-Crouch Elementary School to participate for the first time. A lot of schools in the area are already doing this and we thought it would be a good way to focus on physical education for children.

Along with Michelle Mellett, Brocato has been leading the group, which has dubbed themselves The Loping Lions, in casual training, which consists of running in a field after school.

A lot of children do sports, and running helps them build endurance, said Brocato. This also allows Campagna Center children to participate and get some fresh air and exercise.

Brocato and her rookies will be up against the veteran Charles Barrett Elementary School, a winner of one the 2007 MCM Healthy School Awards for being one of the top three schools with the most participants, and Hollin Meadows Elementary, a first-time participating school with 125 runners.

We hope this will be a springboard for forming a running club, said Brocato, who didnt hesitate to add, laughing, But I wont lie. The kids are also very excited about getting a medal.

For the first time in the history of the race, 10 specially commissioned mile-markers by preeminent graffiti artist Kevin Irvin will guide runners along the nine miles of the course located in Virginia.

A permanent artist at Alexandrias Art Whino collective gallery, Irvin designed the nine-foot tall, graffiti-style markers, which include mile 1 and mile 26, to feature a unique and colorful blend of art and running.

Ranked the fourth largest marathon in the world, the weekends festivities are expected to bring an estimated $40 million in revenues to the region, including many area hotels and restaurants that are hosting runners and the 150,000 spectators expected to cheer them on.

As race day nears, the excitement is building and more than a few local runners are feeling twinges of jealousy, including Thomas.

There are only so many marathons a body can run well, said Thomas. And I know Im going to wish I was out there come Sunday. But as they say, theres always next year.