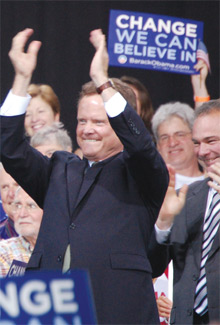 It was almost inevitable that once Democrat Jim Webb was elected United States Senator, the award-winning journalist and author of eight books would begin chronicling every passing moment spent in the worlds most exclusive club.

Working nights and weekends last year in the writing office he has maintained for 19 years, away from the clatter and hot breath of Capitol Hill, Webb penned A Time to Fight, which was released by Random House last month.

The book, all 255 pages of it, is infused with intelligence, force and Webbs firebrand style which made him a hero among Virginia Democrats who propelled the political neophyte to office, and a cursed afterthought to loyal Republicans who watched him bolt the party and sink the re-election of Sen. George Allen (R) of Mount Vernon.

It lays out a vision for the country in complex and unruly times, told by, he writes, the only person in Virginias history elected to statewide office with a Union card, two Purple Hearts and three tatoos. I made a commitment to write the book and it took me about a month and a half, Webb told The Alexandria Times on Wednesday between voting sessions. I write a lot at night and on the weekends, and keep notes during the day.

The book reads like a blueprint for how to run for higher office. And until this week, the celebrated and outspoken writer-senator was fawned over by political bloggers as a made-in-heaven vice presidential pick for presumptive Democratic presidential contender Barack Obama.

To them, Webb possesses all the right credentials: A first-termer like Obama (thus an outsider), a wise sage (over 60), with three decorated tours of Vietnam (needed military experience), a solid regional pick from the New South (Virginia), racial (white) and political philosophy (centrist to conservative).

The easy betting among pundits was that once former Gov. Mark Warner (D) of Old Town pulled his name from consideration two weeks ago, Webb might be the perfect Virginian to fill out the Obama ticket. Only weeks ago his Capitol Hill colleagues were referring to him as Mr. Vice President, as Sen. Claire McCaskill (D-Mo.), called him on the Senate floor in June.

But on Monday, Webb — exhibiting his independent streak and his penchant for surprise — took himself out of consideration amid growing speculation that he was on Obamas shortlist of running mates. He told Obama of his decision last Thursday in a phone call.

Last week I told Senator Obama and his presidential campaign my firm intention to remain in the Senate, where I believe I am best equipped to serve the people of Virginia and this country, Webb said in a statement. Under no circumstances will I be a candidate for Vice President.

Webb told The Times that he needed to make his intention clear. I needed to clear the air, he said. There had been a lot of speculation for about eight or nine months and it was diverting us from doing what we need to do here. I needed to make it clear that I was not interested.

However, Webb said he would continue to campaign for Obama, especially in Virginia, which has not swung Democratic since Lyndon B. Johnsons landslide victory in 1964. I am strongly behind Senator Obama, who I believe can win in Virginia, he said.

On Tuesday night, a large crowd of admirers gathered for a book-signing event at Politics & Prose in Chevy Chase, to hear Webbs views first-hand and to catch a book signature and perhaps a few fleeting moments with the political celebrity. Hes really a superstar by my book, said Myra Wade of Chevy Chase, an attorney who works downtown. Its a shame he wouldnt allow himself to be considered for the vice presidency, but he must have his personal reasons.

With Warner and Webb out, that leaves in Virginia only Gov. Tim Kaine (D) on Obamas radar of prospective running mates. Kaine, a law school classmate and early Obama supporter, told reporters in June that he would be eager to run on an Obama ticket if asked.

On Tuesday, Kaine said in a statement that while he believe that Webb would have made a great vice president, it is good news that hes staying at his post. In a very short period of time, Jim has made us proud to call him our Senator, Kaine said. His service to Virginia and to the country has been invaluable and he and Mark Warner are going to make a great team after this Novembers election.

Much of Webbs new book is a hard-hitting plan of attack for putting government back to work for its constituents, and for restoring the nations damaged standing around the world. It also makes a convincing case that Webbs strengths lie principally in foreign policy and military affairs, two areas Obama has been criticized as lacking.

His ancestors fought in every major American war, and after finishing first in his class at the Marine Corps Officers Basic School at Quantico, Webb served in Vietnam and was awarded the Navy Cross, the Silver Star Medal, two Bronze Star Medals and two Purple Hearts. Two decades ago, he was the first Naval Academy graduate to serve in the military and then become Secretary of the Navy, serving under then President Ronald Reagan. His son Jimmy served a long tour with the U.S. Marines in Iraq.

In 2005, after a successful career as a war correspondent, author of six bestselling novels and acclaimed screenwriter, Webb recalled that he took several political activists to the Fish Market restaur ant in Old Town and asked them to calculate his chances of unseating incumbent Sen. George Allen. They all agreed that I had about a 90 percent of losing, Webb chuckled.

But in his victorious 2006 campaign, Webb made a cogent argument to Virginia voters on disengagement from Iraq and for replacing a senator (Allen) who voted 99 percent of the time with a President sagging in the polls. To drive his point with voters, Webb often wore Jimmys combat boots on the campaign trail while calling for a gradual end to it.

It is frustrating the process has gone on hold while we wait for a new administration, Webb said. We hear more out of Iraq these days than we do Washington.

In the meantime, Webb bides his time among the scorpions in a jar, as he refers to the Capitol in his book, a reference he told The Times was not directed at his fellow Senators or his hard-working staff. I thoroughly enjoy the legislative process, he said. Sometimes its like a complex piece of non-fiction where we assemble the facts and approach the issues intellectually, as I would as an author.