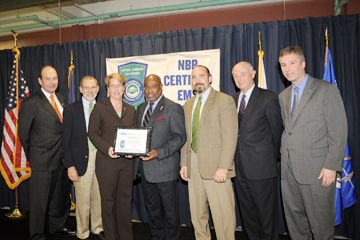 At a ceremony last week honoring the Alexandria Sanitation Authority for becoming the first water reclamation facility in the State of the Virginia and only the 20th in the nation to be admitted into the prestigious National Biosolids Partnership (NBP) Environmental Management Program, Mayor Bill Euille said, This certification means much more than achieving high standards. Its about being green not only in benefiting the environment, but saving money. Euille went on to praise ASAs leadership and board of directors, and said that, By producing clean, safe and reclaimed water in an environmentally-friendly and sustainable manner, ASA ensures that our community can continue to thrive.
Many of the speakers at the ceremony held at ASA praised the organization for its commitment to excellence in its operations. Virginias Assistant Secretary of the Office of the Secretary of Natural Resources Jeff Corbin thanked ASA for going above and beyond compliance standards. And James A. Hanlon, director of EPAs Office of Wastewater Management added that ASA demonstrates best practices for the entire industry.
William Bertera, Water Environmental Federation executive director, headquartered in Alexandria, echoed Mayor Euilles comments about the importance of this certification to the City and beyond. Its important to the community around it and important to the nation. This is a good government award. This is what gives government a good name, he said.
Adam Krantz, Managing Director of Government and Public Affairs for the National Association of Clean Water Agencies stressed the importance of educating the public and policymakers about the critical role that biosolids play in environmental sustainability and producing high-quality reclaimed water.