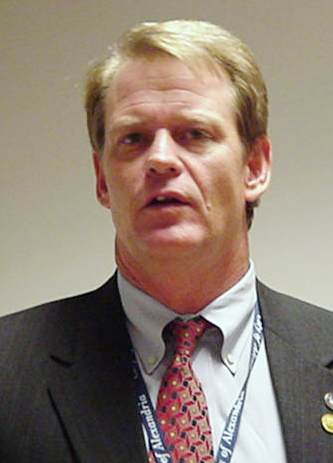 Kerry Donleys scroll of professional titles evokes the resume of an errant drifter. Then again, most vagabonds have not placed in front of their name headings like mayor, city councilman, executive vice president, athletic director and chairman of the Democratic Party of Virginia.
Since June, the Alexandria politico has stepped down as T.C. Williams athletic director following a three-year term, announced his candidacy for the Virginia House of Delegates and retained his post as a vice president at Virginia Commerce Bank. Most recently, though, Donley announced he will run for another stint on Alexandrias City Council, where he sat behind the dais from 1988 to 2003 as a councilman and mayor, when elections are held next May.
Im just trying to keep the obituary interesting, joked Donley, a Democrat. When youre in politics, at least in Virginia, its based upon citizen legislature. So there really isnt just one career path. The political career path thats sort of a separate path, and the two kind of intersect.
After announcing over the summer that he would run for gubernatorial hopeful Brian Morans delegate seat, Donley changed his mind, opting instead to venture back into municipal politics. Moran sits on the 46th Districts delegation and the future status of his seat is uncertain. He has yet to decide if he will pursue a simultaneous candidacy for governor and delegate.
Donley said the House seats dubious vacancy was a factor but it was the citys economic doldrums and the direct nature of local government that propelled his decision. He would rather be one of seven Council members than one of 100 House delegates.
One of the great things about local government is the decisions you make directly affect your community, Donley said. And the same cant be said at different levels of government state and federal government. I think the citys got some tough times ahead and it got me thinking that it might be better to be one of seven members on the City Council, making concrete decisions affecting my community, as opposed to one of 100 down in Richmond.
After discussing the budget shortfall with City Manager James Hartmann at an Animal Welfare League event, Donley got to thinking that his background in banking (and as former mayor) made him an ideal candidate to rejoin the Council in the formative stages of a worsening city economy. Donley ushered the city through budget years both tepid and tough in the 90s, diversifying the tax base and focusing on different revenue streams. He believes he is ready to reload a local bid with the economy as his stepping stone.
Credited with bringing the mammoth U.S. Patent and Trade headquarters to Alexandria, Donley noted that while the city cannot develop its way out of the void in the short term, long-term economic security depends on balancing residential property taxes with commercial property taxes, otherwise the residential community is going to pay a disproportionate share of the tax burden in the city, he said.
In other words, because Northern Virginia economies rely heavily on real property taxes, developing more commercial properties could dilute that burden on residents while widening the citys tax base.
The city has already aggressively pursued closing the budget gap with efficiency measures and by cutting services in the short-term, as well as planning for the daunting years ahead. Donley said the city is being creative and that he would be confident making decisions on current issues, but wants to look five to 10 years down the road.
Some [repercussions of adjusting the budget] are going to be very important services that are going to be reduced, because unlike the federal government, we cant treat the treasury like its a giant Visa card, Donley said. We have to live within our means, and that calls for tough decisions, both in the current fiscal year and the upcoming fiscal year. If Im fortunate to be nominated and elected, I wouldnt take office until a lot of those decisions are already made, but that doesnt necessarily mean that there wont be tough decisions in the future.