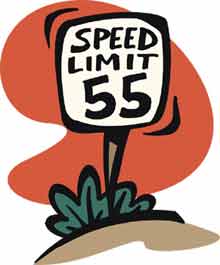 Back in 1995, Bill Clinton was President, O.J. Simpson was on trial for murder and 55 was the national speed limit.

Last week, Sen. John Warner of Alexandria was pondering aloud on the Senate floor about the return of at least one of those memories.

Alarmed by soaring fuel costs and degradation of the climate, the moderate Republican has  been pushing Congress for the return of the double-nickel speed limit.

Warner says it’s time to jump start a serious conversation about saving energy by driving ten and sometimes 20 miles per hour slower on the nation’s interstate highways to spare us all from wallet-robbing costs at the gas pump.

Congress imposed the 55-mile-speed limit during the energy crisis of the 1970s and the law remained on the books for 20 years. In the early ’90s motorists became hostile to the notion of government telling them how fast they could drive and ultimately Congress revoked the national speed limit.

While Warner isn’t saying what the new speed limit should be, he points out that American motorists saved 167,000 barrels of petroleum a day when the 55-mph speed limit was in place. This week the retiring Virginia lawmaker said he would likely press his fellow senators for legislation once the Department of Energy determines the most fuel-efficient speed limit for the nation’s highways.

“We have to take the lead in Congress, and hopefully the president will join,” Warner said uesday in a speech on the Senate floor. “We have that duty.”

The nation’s truck drivers, who this year are expected to face a $22 billion increase in their collective $135 billion spent on diesel fuel, agree that the speed limit should be lowered. The Arlington-based American Trucking Association, which represents about four million truckers, is asking Washington to set a national speed limit of 65 mph.

“We are deeply concerned about the impact of diesel price increases on the motor carrier industry and on our national economy,” said spokesman Clayton Boyce. “In the face of continued high fuel prices, ATA is working to find solutions to this national problem by ensuring that trucking, the backbone of our economy, does not break.”

Boyce said that a 10-mile reduction from 75 mph would lower fuel consumption by 27 percent.

Over the years Warner has been a strong advocate of renewable energy sources and pushed for offshore drilling in Virginia and other states. In May, he joined climate change advocacy groups and most Democratic senators to co-sponsor the Climate Security Act of 2008, which would have required the United States to make major cuts in greenhouse gas emissions in coming decades. The legislation, co-authored with Sen. Joe Lieberman (D-Conn.), was defeated on June 6.

Warner said that what got him most alarmed on the issue was when he read about Meals-on-Wheels volunteers who could no longer afford to take food to the needy because of high gas prices. “There are millions and millions of Americans suffering terribly from these high gas prices,” he said. “This causes me severe heart palpitations and concern.”

Tying the knot: Love in paradise

Olivia Anderson - October 6, 2022
By Olivia Anderson | [email protected] Sarah and Jeremy Simmons are explorers. The Old Town couple, who moved to Alexandria last year, spends much of their...