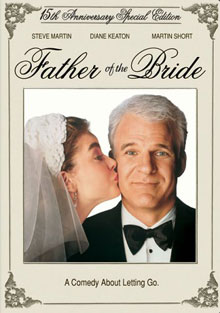 When considering the great father figures in cinema the most memorable, like the cream, rise to the top.

And make no mistake, this is a great group.  They are wonderful dads, full of character, each one loving, protective, and trying to be the best he can.  They also demonstrate some of the quintessential Moments Of Fatherhood, whether it’s Finch gently dispensing his wisdom to his daughter Scout as they sit on the front porch, or George Banks gaze, full of joy while simultaneously suppressing tears, at the first sight of his daughter as prepares to walk her down the aisle.

Even for the childless it is easy to watch these scenes and think, “Oh yeah, Ill do that when Im a Dad,” and chances are you will.  You will have quiet moments to teach lessons.  You will have wistful moments of joy and pride on your child’s wedding or graduation.  Such moments are easy to imagine.  But as any parent knows, those moments are not a surprise.  C’mon, we all saw (or see) those moments coming.  It’s the other ones that make being a parent the roller coaster adventure that it is.

Because there are, for all parents, the moments that No One Tells You About.  When you’re expecting your first child, no one tells you about the crippling effects of sleep deprivation that an infant can inflict upon you, or the unique brand of worry that washes over you as you wait for your teenager to come home from a party, especially if he or she is late.

So it is too with Movie Dads.  Sure, Peck is wise in his counsel of young Scout, and Tracy comically befuddled when his daughter brings home fianc Sidney Poitier, but (rightly or wrongly) the inner struggle and torment most fathers wrestle with isnt revealed by these characters.  Great as he is, Atticus Finch doesn’t reveal those aspects of being a father that no one tells you about.

That is why, somewhat unexpectedly, two of the best role models for today’s modern father are a Depression-era mob enforcer and a clownfish.

In Road To Perdition Tom Hanks plays Michael Sullivan, a taciturn husband and father, who also happens to be a hit man for the local Irish mob boss.  When his wife and youngest son are murdered, he sets out for revenge with his first-born son, Michael Jr., in tow.

Finding Nemo is the Oscar-winning animated story of Nemo, a young clownfish who is captured by divers from his home on the Great Barrier Reef and taken to live in the fish tank in a dentists office in Sydney.  Setting out to retrieve his son, a timid father named Marlin (voiced by Albert Brooks) battles sharks, jellyfish, and all manner of monstrous obstacles along the way.

Of the two films it is easier to dismiss Finding Nemo, mainly because it is an animated childrens movie.  Upon multiple viewings (as some parents must surely have experienced), however, it begins to sink in that it is first and foremost a movie about the experience of being a father.  Marlin does the things any father would.  He is single-minded in his determination to get back his son.  He overcomes his own fears in the face of adversity.  And he watches with joy as his son eventually demonstrates his own moments of success and maturity.  But what separates Marlin from most other well-known film dads is the fact that he shares his self-doubts and sense of limitations.  He knows he’s a coward at heart and desperately wants his son to be strong, while at the same time being terrified that any harm would befall his only child.

Likewise, in Road To Perdition Michael Sullivan literally battles not only the local mob but takes his fight to Al Capone.  Repeated brushes with death are shaken off as he continues his pursuit, and in the films most joyous sequence, Sullivan allows himself a proud half-smile as he teaches Michael Jr., (only 14 years old) how to drive.  But what links Marlin and Michael Sullivan is that both unabashedly share one of the more prominent-yet-secret aspects of fatherhood: self-loathing.

Marlin confesses his despair to the audience, while Sullivan reveals his own self-loathing to his remaining son.  Michael Jr. asks the question all children with siblings ponder at some point in their lives: did you love my younger brother Peter more than me?

No.  I loved you both the same. Sullivan replies.

You were always different with me.

Was I? Sullivan asks.  Then, pondering for a moment, he shares the truth.  Well, I suppose it was because Peter was just such a sweet little boy, you know?  And you..you were more like me.  And I didnt want you to be.

In that moment of stunning honesty Sullivan reveals the secret prayer many fathers harbor: that their children will not inherit their flaws, weaknesses, or lot in life.  It is the prayer eloquently summed up in The Godfather when Vito Corleone, referring to the life of a mafia don, confesses to his adult son Michael, I never wanted this for you.

Ultimately, Marlin and Michael Sullivan witness the moment all fathers dream of: seeing a child mature, developing the strength and skills of self-reliance necessary to survive and thrive in the adult world.

On Fathers Day, there is no greater gift than that.

Chris Hill has been a resident of Alexandria for 17 years.