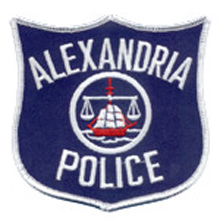 I have a new gal pal.

By night, she is a true fashionista in lipstick and high heels.  But by day, she transforms into a Terminatrix in boots and dark sunglasses.

Julie Goble is an officer with the Alexandria Police Department, on the force for six years.  This week, for the amusement and edification of our readers, we are having a ride-along.

Goble picks me up at my condo in her official vehicle as neighbors cast a curious glance.  Theyre coming to take me awayha ha!  I have to sign a journalists waiver.

That means that if the car should roll during a pursuit, or if we are shot at, or pelted with rotten tomatoes or whatever, the department’s not liable for me.  Whose idea was this?

After the formalities, off we go.  I am having a vanilla latte in the passenger seat and watching as Officer J. D. Goble, badge #1916, files a report on a stolen vehicle from earlier that morning while this journalist was still asleep.

Goble and her day shift colleagues have been up since 4:30 a.m., in order to be in uniform and in place at roll call by 0600 (way to darned early for anything in my book).

At 511 in her duty boots, can be slightly intimidating.  Not too many women I know strap on a Glock in the morning.   Right now, Officer J.D. Goble is speaking some impenetrable language into the radio, in response to a call to check a reported traffic signal outage a few blocks away.  We go for a look. There is no need for her to direct traffic, so we are mobile again.

As have all officers on the 300-plus force, Goble attended the Northern Virginia Criminal Justice Academy in Ashburn. The course includes five months of physical training, firearms instruction, defensive tactics and law.

In addition to traffic, Goble is a primary responder to potentially dangerous calls: domestic violence, other altercations, suicides, armed or bank robberies, hostage situations.  As such, she drives a glowing white Chevy Suburban emblazoned with the Departments name, which has room for the special weapons she could need in the course of a day.  The nature of these weapons is proprietary, but after a cursory inspection I can say that I pity the dummy who tries to rob a bank in Alexandria.  A bag in the back seat contains stuffed animals (for calming upset children)–and drug testing kits.

Periodically, if she observes a citable traffic related offense, she will run a license tag through the system.  NCIC clear, a computerized voice tells her.  Did you know it is illegal to hang those little air fresheners from your rearview mirror? Who knew?   Nobody knows that.  Ignorance of the law is no defense, Goble warns.  Air fresheners??!   I thought this was about fighting crime and suppressing evil.  Tiny trees?!   (Five or six of these in a car the police have dubbed felony forest.  Use your imagination.)

A call comes in, to which Goble must respond with lights and sirens. As we make a modest haste down Mount Vernon Ave., the road magically clears before us.  Chickens, ducks, pedestrians, and Toyotas scurry out of our path.  Some citizens at the destination have to be taken into custody, as it were, and numerous units are present because a felony is involved.  Stay in the car, she advises, and I obey without complaint.

Later, Goble and another officer take a statement from a victim of domestic violence.  We have to go down to the jail for an identification, and as we arrive, for the first time in my life I witness someone being Mirandized.  In another country, which shall remain unnamed, I have witnessed the rough treatment of suspects.  Suspects.  In America, however, the person actually under arrest is yet treated with kid-glove politeness.  Interesting, because I know what just happened and there are a few choice words I would like to employ to his face.  I really hope I never see the inside of the jail again.

The day is over and Goble lets me try on her duty belt: loaded Glock, extra ammo, expandable baton, pepper spray, handcuffs, flash light, cell phone, etc.  No wonder she is tired, the thing must weigh 15-20 pounds and she has been wearing it for 12 hours.

I believe I will leave the heavy lifting to the professionals on the force, and stick to lifting my laptop to the internet caf.

Kiki Obadal writes from Old Town, and can be reached at [email protected]