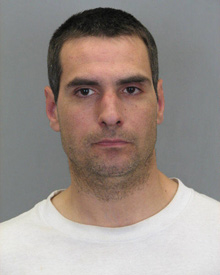 Police arrested a 38-year-old Falls Church man on Friday, March 7, after he allegedly stole a car at gunpoint, shoplifted at a drugstore, then struck a vehicle and fled the scene.

Mark P. Livornese, of 7103 Norwalk Street in Falls Church, allegedly approached the passenger in a 1995 Toyota sedan, produced a gun, demanded that she get out of the car and drove it away. The incident occurred in front of the Fairfax Laundromat, 6353 Columbia Pike at approximately 8 p.m. while the driver was briefly inside the laundromat.  The victim, a 50-year-old Falls Church area woman, was not injured and she contacted police.

While police were at the scene, they received reports of a vehicle fitting the description of the stolen vehicle informing them that it had been involved in a hit and run crash nearby.

Additionally, the City of Falls Church Police advised officers that the vehicle had also been connected to a shoplifting suspect at the Rite Aid at 1003 West Broad Street. Livornese was charged with carjacking, use of firearm in commission of a felony and was taken to the Fairfax Adult Detention Center. Additional charges were placed by the Falls Church City Police Department.