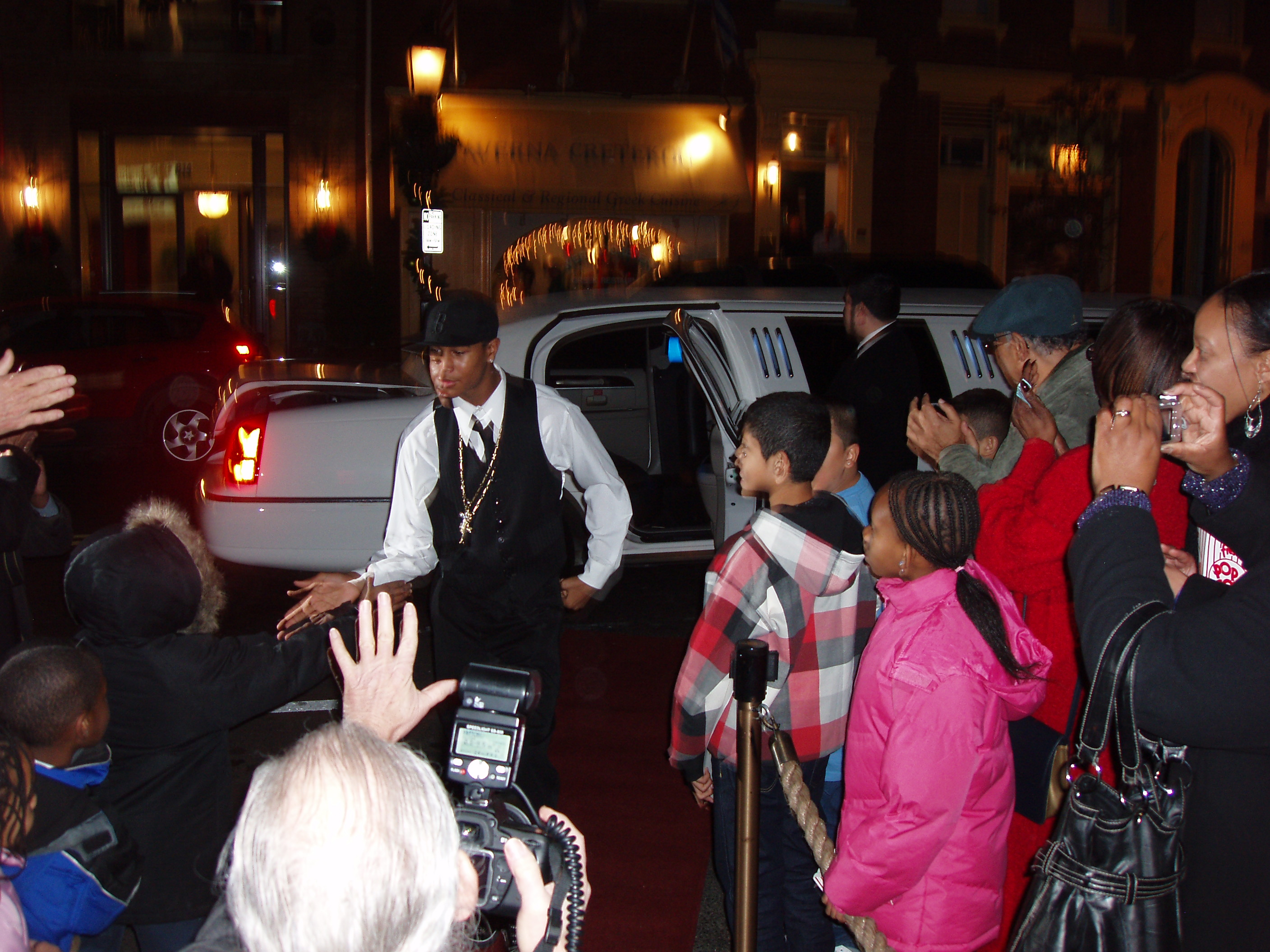 Francis Ford Coppola, Tom Hanks and Steven Spielberg move over. Nine young moviemakers have emerged on the scene via the iMovie Mentors Programs Second Annual Film Festival that was held December 9. The nine seventh graders from George Washington Middle School and their mentors presented their short documentaries to an overfilled Old Town Theatre on King Street, with more people showing up than there were seats available. It was standing room only as folks stood in the back to watch the clever and often humorous short film clips.

The middle school filmmakers arrived in a stretch white limousine, hopping out of the limo onto the red carpet that led into the Old Town Theater. Scores of friends, relatives and supporters jammed the sidewalk. As they emerged from the car one by one, cameras flashed, screams became louder and more intense, congratulatory signs were waved and the budding filmmakers all gave their adoring fans huge mega-watt grins. Not only were the beaming young film producers excited as they walked into the theatre, but the moms of the boys that had been mentored were also bursting with pride.

The film festival showcased the iMovie work that took most boys and their mentors 10 months to plan, stage, film and edit. The night at the theatre is iMovie Mentors crowning event, and the audience clearly enjoyed watching the screening of crime prevention public service announcements and short films that featured topics such as skateboarding, the Alexandria Arts Festival, How to Make a Movie, and Fun Things in Alexandria.

After all of the movies were shown, there was a question and answer session where the film students and their mentors talked about working together and learning to use the software to create the movies. Some of the mentors acknowledged that the boys knew more than they did about working with an Apple computer and the software. The young celebrities then sat down at tables and autographed copies of the DVDs that contain a combination of all of the movies that had been created during the program. Linda Odell, Director of Alternative Programs for the Court Service Unit, said that the DVDs will soon be made available for purchase to the general public.

The excitement at the Old Town Theater for Tuesdays movie screening was positive and palpable. Ryan Harris mom, Pebbles, commented that she cannot get over how much the iMovie program helped his confidence. Similar comments were made about Henry Torres. I cant believe the difference the iMovie program has made for Henry. His self-esteem has improved, he volunteers to help out the younger children at the Community Lodgings Family Learning Center, and he is inspired to write stories all the time. Whenever he has free time, Henry is writing, says Emily Barnes, the Community Lodgings Center Coordinator. One of the mentors, Ralston Smith, stated in the question and answer session that, This project isnt just about making the movie: It is about making a friend.

While this weeks screening was the end of the 10-month program, more mentors are needed for next year. Mentors make such a huge positive impact in the life of these impressionable pre-teen kids. Right now we really need more men for the Season 3 iMovie program, says Odell. We have a waiting list of women who want to volunteer with our girls Space Of Her Own program in 2010, but only a couple of men have expressed interest in volunteering with Season 3 iMovie Mentors, which is slated to begin in just two months. It requires a Tuesday evening commitment, from 5:30 p.m. to 8 p.m. and mentors learn all aspects of filmmaking how to use iMovie, iDVD and Garage Band. No film or mentoring experience is necessary.

A suggested donation or contribution of $5 was requested for the attendees, and as a result, $634 was raised to pay for outings and activities for the boys and the mentors to continue their relationships.

A fabulous time was had by the middle school film producers and their families and friends. Odell closed by saying, All I can say is this is a fun way for men in the community to have an impact on Alexandrias youth by mentoring. The bonus is that they learn all about filmmaking in process. I wish I could tell the potential mentors about how mentoring has been proven to decrease crime, violence and teen pregnancy and increase the likelihood of high school graduation and enrollment in college.

When the boys and their mentors left the Old Town Theatre, it was clear that not only had these young mens lives been changed, but their infectious enthusiasm had made a difference in the lives of the mentors. Watch out Steven Speilberg. We have not seen the last of these movie making lads.