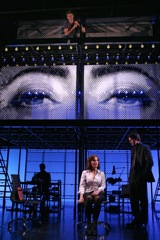 The phrase crazy in love takes on new meaning as depression and crisis are explored in the contemporary new musical Next to Normal, now playing at Arena Stage in Crystal City.
With provocative and sometimes profane lyrics by Brian Yorkey and an electrifying score of more than 30 original songs by Tom Kitt, Next to Normal shows how far two parents will go to keep themselves sane and their familys world intact.
Arena Stages latest production is a riveting and powerful new musical delivered flawlessly by a solid six-member cast. Its a beautiful musical that pulls on your heartstrings at every twist and turn of the complex plot. The rock music soundtrack coupled with powerful vocals makes for an exhilarating theater experience.
Next to Normal is the story of a struggling mother with manic depression and how the illness has affected her not-so-normal family. The play takes no prisoners as it provides satire on a wide range of modern issues. From drug abuse and suicide to psychiatry and young love there seems to be no subject off limits in this brilliantly acted play. Be prepared for some harsh language, but it all seems appropriate for the circumstances.

Originally presented at the 2005 New York Musical Theatre Festival under the title Feeling Electric, Next to Normal made its Off-Broadway debut earlier this year at Second Stage Theatre. Playing an extended, sold-out run, it received the Outer Critics Circle Award for Outstanding New Score, as well as nominations for Outstanding Musical, Outstanding Lead Actress in a Musical and Outstanding Featured Actor in a Musical.

With many of the original New York cast reprising their roles at Arena, the production provides a spellbinding evening of entertainment, complete with an industrial three-story set that houses a dizzying display of lights as well as the on-stage orchestra.

Michael Greif (of Rent fame) directs the complicated staging and intricate acting, anchored by Alice Ripley in the role of Diana Goodman, the mother who seemingly has all the problems. A veteran theatre actress, Ripley originated the role in New York, receiving Outer Critics Circle and Drama Desk nominations for a mesmerizing performance that is duplicated here.

J. Robert Spencer takes on the role of Dianas husband Dan, who is stoically trying to keep his family together. Spencer, who originated the role of Nick Massi in Jersey Boys, is a powerful singer who delivers a role mixed with hope, pride and sadness as he sees his world unraveling around him.

Louis Hobson does a terrific job as Dr. Madden and Dr. Fine, the doctors tasked with solving the complex psychiatric puzzle that is Diana, while Jennifer Damiano plays the obsessing daughter Natalie. Aaron Tveit plays Gabe, the son who haunts the stage with his presence and vocals, and Adam Chanler-Berat rounds out the cast as Henry, the weird, nerdy and drug-abusing boyfriend of Natalie.

While the plot may seem complicated at first, it is the original score and the voices that deliver them that takes this musical to new heights. Let There Be Light, which begins and ends the show, is particularly dramatic and sums up the dysfunction that is the Goodman family. Tveit, as Gabe, shines throughout the play, in particular for his rendition of Im Alive.

From the opening number to the final seconds, Next to Normal proceeds at a blistering pace that pulls the audience along on a rollercoaster of emotions. For this bizarre family, the highs are oh so high and the lows are oh so low.

The outstanding musical score is delivered with extraordinary strength by a talented group of musicians. Even the innovative set configuration and lighting captures the imagination of the audience and doesnt let go for the entire play.


There is no escape as you are pulled into the plot by the talented cast of this bold and contemporary new musical. The shows great lyrics, high energy and electric staging make Next to Normal far from normal and a satisfying must see for all musical theater fans.

Next to Normal is playing now through January 28 at Arena Stage in Crystal City, 1800 South Bell St., Arlington. For tickets or more information, visit www. Arenastage.org or call 202-488-3300.