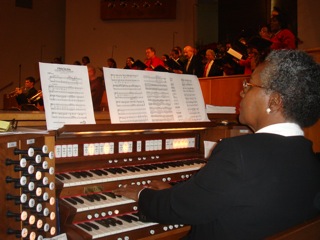 If you think you know the music of Duke Ellington, think again. The beautiful Alfred Street Baptist Church was the setting Sunday for the annual Alexandria Symphony Orchestras Childrens Holiday Concert, featuring Ellingtons own jazz arrangements of selections from The Nutcracker.
Alexandria Mayor Bill Euille greeted an audience of over 550, the largest crowd in the history of the concert. Euille, the Master of Ceremonies, was in a festive mood as he recognized Kim Allen Kluge, ASO Music Director, for his 20 years of service to Alexandria. Kluges commitment to the development of a fully professional orchestra and the orchestras education programs throughout Alexandria schools were noted by the Mayor.
Playing to an audience that was a mixture of well-behaved children dressed in their holiday finest along with ASO faithful fans, the first half of the holiday concert was devoted to Washingtons own Duke Ellington. The orchestra played a rousing rendition of Ellingtons interpretation of Tchaikovskys Nutcracker Suite. The entire piece, arranged at the height of the big band era, had the adults in the audience swinging in their seats and children literally dancing in the aisles.
Throughout the Ellington program, Kluge read excerpts from The Nutcracker story to set the stage for each piece the orchestra was about to play. And in each component of the Nutcracker, the orchestra showed off its range and sophistication. This orchestra is clearly comfortable in any genre of music as trumpets, trombones, saxophones and clarinets filled the rafters of the church with the jazzy and joyous holiday sounds.
Of particular note was the stirring performance by tenor sax player Tim Powell during the Nutcrackers Arabian Dance. He had everyone tapping their feet and bobbing their heads.
The ASO was in perfect sync throughout the Nutcracker program. They would have made the Duke proud as they showed a mastery of the big band sounds that fit into the era of Dorsey, Miller and of course Ellington himself. The audience loved every minute, but it seemed the group enjoying it the most was Maestro Kluge and the energized ASO members.
For the second part of the program, the orchestra then turned to more traditional holiday fare as they rattled off Santa Claus is Coming to Town, Sleigh Ride, Frosty the Snowman, Charlie Browns Christmas and Rudolph the Red-Nosed Reindeer. The audience loved every minute as the applause grew louder with every song.
The conclusion of the concert was a jubilant celebration as members of three community choruses joined forces for a traditional sing-a-long. Some of the best voices from the Alfred Street Baptist Church choir, Westminster Presbyterian Church choir and the Metropolitan Chorus led the audience in a stirring round of Americas most beloved holiday songs. From Joy to the World to Deck the Halls, the choirs and the audience sounded angelic as they stood and sang in unison. As Jingle Bells was played, bells were passed out to all the children in the church. And as the concert ended with We Wish You A Merry Christmas, Santa appeared and the children jumped for joy and cheered, Santa, Santa, Santa! A standing ovation followed for Maestro Kluge and the ASO members.
As satisfied concert goers left the church, it was clear that, even in these hard times, there are still community traditions that lighten our hearts and make the world a better place. The annual ASO Childrens Holiday Concert is one of those traditions.
Photo/Jeanne Theismann
Mayor Bill Euille welcomed the audience to the ASO holiday concert and recognized Maestro Kim Allen Kluges 20 years of service and dedication to the orchestra and community.