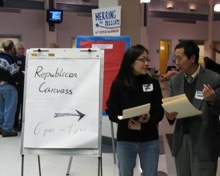 Amid children playing on the foosball tables at William Ramsay Elementary School, two magic marker signs resembling a page out of a coloring book directed Democrats one way and Republicans another. Adults trickled in excitedly as kids gripping backpacks yearned to leave. Two obviously impromptu political functions, the 46th District Democratic Caucus and Republican Canvass, were playing out.

When Del. Brian Moran announced early Friday afternoon that he was giving up his delegate seat in the 46th District to concentrate fully on his candidacy for governor, Alexandria Republican and Democratic leaders scrambled to register candidates in time for Tuesdays caucus and canvass. By law, they had to be scheduled a month before the special election on Jan. 16, 2009, before the next General Assembly session.

To be honest, Im angry, said Chris Marston, Chairman of the Alexandria Republican City Committee. [Moran] knew how hard it would be to run for governor and hold a seat at the same time. He had plenty of time to decide.

Joe Murray, special assistant to U.S. Rep. Joe Wilson (R-SC) and the winner of the Republican canvass, had been campaigning for all of five hours and 40 minutes before he was elected as the partys representative. Though he had thought about running since Moran gave up the seat, he did not decide until Tuesday, just before the 4 p.m. deadline and just after his computer froze, forcing him to write his statement of candidacy by hand.

I talked it over with my wife, prayed about it for about five minutes and decided nothing ventured, nothing gained, Murray said. It was an opportunity to serve in Richmond for the benefit of the Commonwealth.

Charniele Herring, former deputy chair of precinct operations-West for the Alexandria Democratic Committee, won the Democratic caucus. A longtime local activist, Herrings campaign was longer four and a half days though she had thought about running since the summer if the opportunity were to arise.

Reaching out to people has been the most important part, Herring said. Im confident in my ability that I can jump in on day one on January 14 in the General Assembly with everyone and address the issues.

Both parties worried that only political insiders would hear about the event. Turnout for the rushed election was low with just 283 voters showing up at the polls. Republican turnout was especially low, with 49 voters. Murray won with 20 votes, just four more than opponent and moderate Republican Phil Cefaratti and educator and blogger Sasha Gong. Herring beat out opponent Ariel Gonzalez, director of congressional affairs at the American College of Radiology, 191 to 43. The 46th District has between 40,000 and 45,000 active registered voters, according to Tom Parkins, registrar of the Office of Voter Registration and Elections.

Parkins was not surprised by the low turnout given the window of opportunity for candidates and said the special election in January will probably also have low numbers.

When you consider the time of year and the short amount of time campaigns are going to have to actually contact voters, lets face it, whenever we have legislative elections and do not have any statewide candidates on the ballot, theyre always low anyway, Parkins said.

Herring is the best-known candidate around the 46th District, which covers the West side of Alexandria and creeps slightly into Fairfax County. Homeless for a period as a child, Herring has resided in the West End of the city for 22 years, dealing with issues from social justice to business. She helped get the Homeless Intervention Act passed in the Assembly and has twice been appointed by Gov. Tim Kaine to the Council on the Status of Women.

Aside from her tenure with the Alexandria Democratic Committee, Herrings local ties are topped off with her role as president of the West End Business Association. One of the major issues on the West End right now is the Landmark and Van Dorn area redevelopment, of which Herring is knowledgeable.

Theres a question, quite honestly, in the area regarding redevelopment and its effect on the economy of the City of Alexandria, Herring said. People fear we have a property owner [General Growth Properties, owner of Landmark Mall] facing financial difficulties and that the area wont be able to be redeveloped in the near future. So thats their concern, because it affects the economy of the city and it affects them.

Murrays short campaign was all it took for the newcomer and Catholic University law student to grab a chance at launching his political career. He has lived in Alexandria for four years and is married with a daughter.

Murray, 33 and palpably enthusiastic, said on the night of the canvass that he is interested in addressing the traffic issues faced by West Enders, as well as the proper spending of property taxes.

Ive always wanted to serve my community, and Ive been wanting to serve on a local level in some capacity as an elected official, Murray said. So for a number of years I thought, when Gods time is right, when opportunity opens up, I would consider running. And after talking about it for a couple days with my wife I decided theres really nothing to lose. I decided, lets give it a shot. Lets go.

After a drawn out presidential campaign that enticed the nation, there was no lack of tension at William Ramsay Elementary School Tuesday night, especially for the three Republican candidates whose race was the difinition of a toss-up. When asked what their chances were, No idea was the consensus. If the miniscule turnout at the canvass and caucus for both parties indicates a pattern, sheer turnout in January could play a large roll in deciding who wins the delegation, even in Democrat-heavy Northern Virginia.