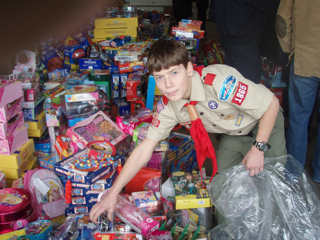 Santa Claus, Mrs. Claus, fire chiefs and firemen from Alexandria and Fairfax County, boy scouts from troop 1865, school administration officials and even a couple of Washington Redskins cheerleaders all united in a common cause on Monday: the packing up of over 3,000 toys for distribution by school representatives to children who might otherwise not get anything for the holidays.

The enthusiasm of the firefighters and volunteers was infectious. Excitement hung in the air as volunteers went about their various tasks stuffing bags with toys while teachers and guidance counselors, armed with lists of needed toys for boys and girls, eagerly awaited their chance to begin filling their schools bags. Scores of bikes in three rows appeared to be patiently waiting to be taken to the far ends of the county or city. Mondays toy distribution is the culmination of the gathering efforts of fireman Willie Baileys 2008 Firefighters and Friends Holiday Rescuers Toy Drive.

The operation, which began more than 10 years ago with a collection of about 40 toys, seemed to run smoothly. The efficiency of the toy bagging and packing process was due to Shelley Gillian, who runs her own consulting company, Collaborative Efforts. Clad in a Santa hat, Gillian strolled around armed with a clipboard as the firefighters and volunteers affectionately referred to her as the Drill Sergeant.

Boy Scout Troop 1865 was an integral part of the bagging operation. The boys in that troop raised over $1,600 for the toy drive by doing odd jobs such a mowing lawns and raking leaves, and Michael Severeig alone raised $1,200 by getting various family members and friends to match what he earned. Twelve boys from Troop 1865 volunteered Monday, while a number of others had tests or projects due and were not able to take the morning off from school.

The Alexandria and Fairfax County senior firefighting personnel all praised Baileys massive toy drive project. John Niemic, president of the local 2068 of the International Federation of Firefighters, explained that, We have been helping with this drive for about 11 years now. It is just another opportunity for our membership to give back to the community, and that is what sets us apart from other labor organizations.

Also offering glowing words of support was Alexandria Fire Chief Adam Tiel, who said, This is not a top down effort. Efforts like these begin with our firefighters, medic and employee groups and we support them in giving back to the community. 24/7/365 they are all committed to service in this community. Fairfax Countys Chief David Rohr weighed in and offered that None of this would happen without the work that Willie Bailey has done. Every year, everyone wants to be here today with Willie.

Bailey recognized several contributors that were in attendance such as Bearing Point Consulting and Bruce Witucki, a popular bartender at Union Street Grill, Sammy Chamberlin from Five Guys, and Drew Grinder, a former bartender at Chadwicks and now a firefighter. Each of these men spearheaded getting the local restaurants involved in supporting the toy drive over the past 11 years.

Another person who received recognition from Bailey was Alexandria Public Schools Assistant Superintendent John Porter, who was standing in the back of the room. Bailey told everyone that John Porter, who was his principal when he was a student at T.C. Williams, took me under his wing and had a lot of influence on me.

After the brief meeting to thank the volunteers, Porter said, I have known Willie Bailey since 1978, and it is tremendous to see all that he has done to make a difference for children in Alexandria, especially when you consider that he is doing this along while raising his children and working as a full-time firefighter.

Bailey has done it yet again. He and his fellow firemen have moved mountains to gather stacks of toys for those who otherwise would have nothing on what should be one of the happiest days of the year for children.

At noon on Saturday, December 20, the Black Fire Service Professionals of Alexandria are hosting a toy party at the Alexandria Hilton located at 5000 Seminary Road. The members of the Black Fire Service Professionals will entertain approximately 150 invited kids. The disadvantaged children will receive a toy, have lunch and visit with Santa Claus. Donations are received from members of the Alexandria Fire/EMS Department, local businesses and members of the community. If you have questions, call Lisa Jones at 240-271-8882 or just simply take a toy to your local fire station before Friday night and tell the firemen it is for Saturdays party.