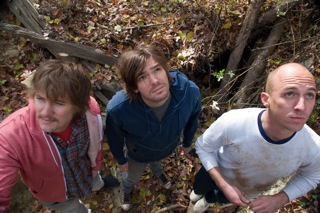 New Rock Church of Fire is a live band. Its three members have unapologetically defined themselves on the D.C. music scene with hard-biting and energetic live shows doubling as hard-biting, energetic parties. But now, with a recent booking at the eminent 9:30 Club Dec. 27, the Alexandria natives have captured their verve and packaged it neatly into the release of their debut album Of the Wild.

Two and a half years after their first show at Laughing Lizard Lounge on King Street and almost a year after beginning the recording process, Floyd York, Mitchell West and Trae Lamond have forged their sound in the clubs of Arlington and Washington, D.C., to arrive at a fast, loud and sometimes fantastical first album. For a band thats been up and coming for a bit, the tandem of an album and a 9:30 Club gig translates to a crucial step in New Rocks development.

We are now in possession of a CD that we just want to get into peoples hands, said West, the groups bassist. Were not looking at this as a cash register. And I think having a 9:30 Club show validates what were doing to a lot of people.

New Rock is not headlining 9:30, which helped push local bands like Fugazi and Minor Threat onto the next level. Its time slot is sandwiched before The Dance Party and after the opening act Crash Boom Bang. But the nod is still significant despite the bands humbleness. Thirty years from now the narrator of VH1s Behind the Music would probably claim in jarring voice that the honor was a metamorphosis of some sort. An honor, yes, but the band knows it is just the beginning of the next level above their frequent gigs at clubs like Black Cat, Rock and Roll Hotel and Velvet Lounge of the game.

We cant play a 9:30 Club everywhere on the East Coast, said York, the bands lead guitarist and vocalist. Its big but its not that big. We definitely never thought wed be there.

York, West and Lamond all graduated from T.C. Williams High School. Now in their mid 20s, it is obvious to them that their strong friend base comprised of high school buddies, local musicians and the many others theyve picked up along the way has contributed to their fan base, helping drive their local success. But they are also at the point where their name is known by complete strangers.

We have an amazing, solid, large group of friends that like to drink a lot of beer, West said over an ale at Old Towns Lighthorse tavern. What started to happen is all of our friends would come to every one of our shows and the clubs would be like, You guys got to come back, that was awesome, we made so much money. And so we are able to hone our live performance quite a bit and become a much better band.

We give them all a reason to go to one place, added Lamond, New Rocks rock-steady drummer and vocalist.

New Rocks talent and onstage hysteria dont hurt the turnout at their shows either. The band is known for its ability to rally hordes of people to their shows through grassroots promotion, and once people arrive, theyre in deep.

Of the Wild gives New Rocks fans what theyve been waiting for a portable version of the live shows to use at their disposal. To see New Rock live is to witness the band in their most genuine form, as with any live act, but the album transfers the experience well with clearer lyrics, cleaner vocals and tighter pounding drums that sound like theyre being beaten with two baseball bats (a compliment for a band that prides itself on its strong percussive backbone).

Lamond works at Chadwicks in Old Town as a bartender. (You may have seen him on Wheel of Fortune, nervously telling Pat Sajak the same thing, blunt to the point of on-air awkwardness and hilarity.) He stands up at work, but sits down on stage, pounding the hell out of the drums, cursing a couple times into the microphone and then Im finished, he said.

When Lamond decided he wanted a new drum set he bought the biggest one at the store. Not the one with the most bells and whistles; the one with the most physically intimidating, obnoxiously large presence. Heavy, swelling percussion intimidates most bands heard on the radio but New Rocks embraces and even relies on the tradition of bands like Nirvana and AC/DC. Its the backbone of their sound though it certainly does not define it.

Of the Wild is not all hard and fast. Even when it is, the melodies are pleasing and the bass lines bumping, funneling into an overall cinematic sound on most songs. Pretty is not a word conducive to capturing this bands overall sound but one song is just that. Fig Tree is a gateway drug into the wilder vertigo of the rest of the album with its, well, pretty melodies and emotional lyrics about relationships, friends and dealing with the surrounding darkness. It is not a ballad by any means but is starkly the most radio-friendly song on the disc.

Its about trying to find your way back out of the dark, said York, who took three or four years to finish writing the song. It ties into finding your way to being normal after being upset. Its a metaphor of getting yourself out of whatever bad thing youre into.

Move onto the harder stuff on the album and youll find continuous, rapid percussion, of course. But also epic electric strums; some are drawn out and lazy even Western at times and some are barbed and acidic. Wests base is vivacious throughout the album, especially on Three Guns where he breaks loose a bit.

Yorks and Lamonds voices play off each other well, the two often taking turns with musical question and answer sessions, both styles evoking a mixture of post-punk and indie, to pigeonhole it. New Rock also nods to metal, grunge and punk music throughout Of the Wild, so the best way to experience the band is with your ears not your eyes. Words can only go so far.

The words used in New Rocks songs go pretty far. Really far. Far out, to be honest. Lyrics like We built Stone Henge on On Salisbury Plain speak for themselves, while the addictive Death Truck describes a tractor-trailer driver on a midnight ride with reapers by my side whose destination is past the point of no return/speed increasing, were gonna crash and burn.

We were driving on I-81 to JMU and I decided to write a song about driving to hell in an 18-wheeler, Lamond said. Imagine if you were just a drunk degenerate, drug using cheating son of a being taken to hell in the front seat of a semi. And its not apologetic at all.

Then there is the Last of the Mohicans-theme inspired Castle of Fire that describes a fantastical scene of knights rescuing a princess from a dragon. Like much of Of the Wild, this track has a cinematic quality to it, this one with three distinct scenes. No lack of imagery here. In fact, almost every track on the album could be used successfully in an action film, from Rambo to Hot Shots.

As excited as they are about the album, the New Rock boys prefer the stage over the studio. I think its nerve racking as hell at first, but when you get into it you just get into the groove, sweat your ass off and it all falls into place, York said. Its weird being a performer, which I dont think any of us imagined ourselves to be, but we are. We are performers.