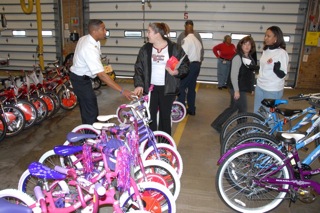 Willie Bailey is not seeking attention or accolades for himself. But the humble, single dad and professional firefighter is very busy seeking out Barbie and Hanna Montana dolls, games like Sorry, Monopoly and Connect Four, and of course bikes and remote control cars. No, this is not the shopping list of yet another parent on a quest for holiday gifts for his over-indulged children. The items Bailey is seeking are going to children in economically challenged families who will probably not receive anything else this Christmas. For Del Ray resident Bailey, time is of the essence because he has 10 fewer shopping and collection days than the rest of us for his Firefighters and Friends Holiday Rescuers Toy Drive. He has to be finished before December 15 when the donated toys are scheduled to be distributed to needy children in our area.

I got inspired to start collecting toys for kids about 10 years after going out on 911 calls along the Route 1 corridor and seeing homes where there was not even a piece of Christmas candy let alone a toy or package to indicate it was Christmas, says Bailey.

That year, Bailey and his fellow firefighters, who are not exactly the highest paid workers in our community, took up a collection and bought toys for 40 children in the Gum Springs area. Last year, Bailey and his all-volunteer group of Alexandria and Fairfax County Firefighters and their friends were able to provide toys to 2,500 kids, including those at Carpenters Shelter.

Bailey continues, I am not used to talking about this. I am used to just doing. We dont want a kid to do without a toy for the holidays. I think we are going to need toys for between 3,500 and 4,000 kids this year. Thats a lot of toys to collect! He has sought out partners in the business community and various faith groups to help make his vision of no child without a toy a reality. Nationwide, Pro Max Realtors, Bearing Point Consulting, Chadwicks Restaurant and Union Street Public House have all jumped on board Baileys toy collection venture.

Running Firefighters and Friends Holiday Rescuers charity is not even this T.C. Williams graduates full-time job. It is only one of the many things Bailey squeezes into his daily routine. He is a U.S. Army reservist and a single dad with a daughter who just graduated from college and a son who is a junior in high school. As if that were not enough, Bailey is a founding member of the Fire and Rescue Support Team (FiRST) program, which helps firefighters and their families when they have an emergency or crisis. Topping those activities off, Bailey is involved with the Progressive Firefighters Association. His energy and enthusiasm for life seemingly have no bounds.
Moreover, his efforts with Firefighters and Friends Holiday Rescuers is not limited to Christmas.

This past August, Bailey and his organization rounded up and filled over 650 backpacks with school supplies so children could start the school year off right with the tools they need. Then in October, Bailey spearheaded a drive to keep children warm this winter and collected 1,000 coats plus hats and gloves by partnering with the nonprofit Coats for Kids.

It is no surprise that Bailey has been honored for his efforts. In 2006, he was named Fairfax County Firefighter of the Year as well as Volunteer of the Year, an honor he is particularly humbled by since it is normally given to groups or corporations and rarely to an individual.

That one really took me by surprise, said Bailey, still clearly moved by the honor. It really does mean a lot to me.

Santa and Willie Bailey have a lot in common: they both go around in red vehicles and make children happy in December, but there is a big difference. While Santas duties end on December 25, Willie Bailey tirelessly gives of his time and talent throughout the year and never seems to stop thinking about who might need his help regardless of the season.

To contribute toys to children who might not otherwise receive anything during these uncertain economic times, email Willie Bailey directly at: [email protected] efore December 14. Bailey or one of his firefighting buddies will come and pick up your toy donation. The toy distribution for Alexandria kids is December 15. Monetary, tax deductible donations are also welcome (with checks made out to Firefighters and Friends Holiday Rescuers, which is a 501 ( C ) 3 charity) and the firefighters and volunteers will go and purchase toys on your behalf. Contact Bailey directly for more information.

Thank you, Willie Bailey, for being an Alexandria Treasure.