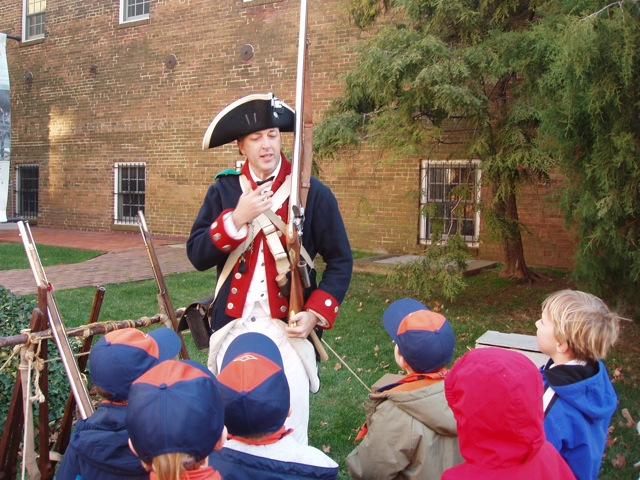 In honor of this weekends Campagna Centers Scottish Christmas Walk festivities, the 1753 home of Scotsman and Alexandria founding father John Carlyle is the subject of this weeks adventure on the Passport to Old Town History. The beautiful Carlyle House and gardens sit back from North Fairfax Street behind a low wall and across the street from City Hall. Today the stately home welcomes tourists, school groups and wedding parties, which is not surprising given that the house has spent most of its 255-year history in the center of Alexandrias political and social scene.

Come this Saturday, Carlyle House will revisit its past as it hosts a re-enactment of sorts called A Soldiers Christmas from noon until 4 p.m. After taking in the Scottish Walk or even marching in it yourself, if you stroll up to Carlyle House on the 100 block of North Fairfax Street and let your imagination go unchecked, you can easily feel transported in time back to Christmas during the Revolutionary War. Small cooking fires as well as fires to warm the soldiers can be found on the front lawn. Soldiers tents are pitched on the front lawn and First Virginia Regiment re-enactors go about the routine daily duties of a Revolutionary War soldier. Periodically, the soldiers take a few minutes to talk to guests on the Carlyle House grounds and explain what life was like for a Revolutionary War soldier. The fife and drum core plays throughout the afternoon and there is also military marching and the firing of rifles.

No one visiting Carlyle House during the A Soldiers Christmas re-enactments could ever leave unmoved by the hardships Revolutionary War soldiers had to endure. For example, some boy scouts who visited last year are still talking about how six soldiers slept in a tent that campers today would never consider housing more than two people. Why did so many sleep in one tent during the Revolutionary War? Because they needed to stay warm. Or, who knew that drummer boys got paid more than many Revolutionary War soldiers? The enemy always tried to eliminate the drummer boy, or his ability to play, since he used his drum to beat out or signal commands to the soldiers. Without a drummer boy, the task of relaying marching or fighting orders became much more difficult.

After sampling a warm cookie, watching the demonstrations and talking with soldiers, visitors can take a tour through Carlyle House. On the basement level of the house, visitors will find the Revolutionary soldiers regimental surgeon talking about what the Continental Armys medical care was like and what medicines they had. The surgeon will also give a memorable overview and demonstration of various 18th-century surgical instruments during the A Soldiers Christmas festivities. Upstairs, tours will see 18th-century army officers and ladies entertaining their guests in the more formal rooms.

On most days of the week, tourists can walk through the Georgian Palladian style home and its lovely gardens. In the 18th century, when Carlyle built the house, it was situated on the river and even had its own dock. Centuries later, the land has been filled-in and buildings now impede the formerly fabulous river views. While the Carlyle family occupied the grand home, it was the center of John Carlyles business, social and sometimes political activities, and ideally located in the heart of Alexandria.

In fact, the Carlyle residence became the center of the international political scene shortly after they settled into their home. Just two years after the Carlyle family moved in, General Edward Braddock, the Commander-in-Chief of the Kings military forces in North America who had been sent to the colonies to contain and oversee the French and Indian War, held a conference of five colonial governors. He chose the Carlyle House for his headquarters when he arrived in Alexandria with his 1,200 British troops. Braddock proceeded to move in for three weeks with his aides, and according to Carlyle, Braddock abused his house and furnishings… and was too fond of his passions, women and wine.

The dwelling survived its brush with history and Carlyle lived there until his death in October 1780. John Carlyles two wives, and all but two of his 11 children, pre-deceased him. Then, his 15-year-old son died one year after Carlyle died, and the house went to his daughter, Sarah. Sarah moved in and her family kept the house until it was sold to a non-family member in 1827.

From 1828 until 1970 when restoration began, Carlyle House had a wide variety of uses: a private residence, a hotel which covered up and hid much of its faade, and a Civil War hospital that was twice commandeered for Union troops. The hotel extended across the front of the property and encompassed the fine old mansion in part of the hotel complex. From 1848 until the Civil War broke out, the Mansion House Hotel as the house-turned-hotel was known, was considered one of the finest hotels on the east coast. By the late 1960s, it had fallen into a state of disrepair. The house is now owned and run by the Northern Virginia Regional Park Authority; it was purchased in 1970, restored for six years and then re-opened for the Bicentennial celebrations in Virginia. Colors and fabrics throughout the house are original or rewoven and recreated to be as close as possible to the original 18th-century fittings.

This Saturday is only one of many special days at Carlyle House; visitors are welcome throughout the rest of the year from Tuesdays through Sundays. Mary Ruth Coleman, director of the Carlyle House, says, The more, the merrier for our Soldiers Christmas. If you cant come by this weekend, then please stop by whenever you can. We welcome visitors everyday but Monday to see how Carlyle House interprets the lifestyle of an 18th-century Virginia family and their servants and slaves. Coleman adds that, On December 13, we are doing a special candlelight tour of the Carlyle House, the Lee-Fendall House, Gadsbys Tavern and the Old Presbyterian Meeting House.

All of the sites on the Passport to Old Town History are worth exploring regardless of whether you reside here or are a tourist. The other sites that have been written about to date include: the Alexandria Archeology Museum, the Stabler-Leadbeater Apothecary Museum and the Friendship Firehouse Museum. Places to be covered in upcoming issues include the George Washington Masonic National Memorial, the Alexandria Lyceum, Historic Christ Church, the Alexandria Black History Museum and Gadsbys Tavern Museum.

For more information: go to www.nvrpa.org/parks/carlylehouse. Cost: Admission is by donation. Phone: 703-549-2997