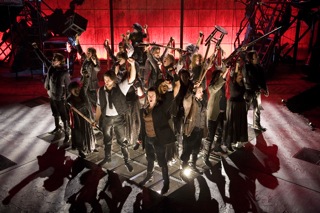 After months of anticipation, one of the longest running musicals in the world has finally arrived as Les Miserables made its debut last week in the innovative and award-winning Signature Theatre.

Affectionately known as Les Miz, the 1985 musical by Claude-Michel Schonberg and Alain Boubil is based on the 1862 novel of the same name by Victor Hugo. With special permission from producer Cameron Mackintosh, Signature re-invents the blockbuster musical, a passionate saga of love and betrayal set during the upheaval of post revolutionary France.
For those unfamiliar with the story, the heroic fugitive Jean Valjean is pitted against the tenacious Inspector Javert in a lifelong struggle to evade capture. Their high-stakes conflict is brought to vivid life against a historical backdrop of unparalleled scale.
Filled with numerous show-stopping numbers like I Dreamed a Dream, On My Own, and One Day More, Signatures production features a 28-member cast and a 14-piece orchestra, all brilliantly showcased in the contemporary 280-seat black box theater.
Every single performer in the cast had a compelling command of the stage, with each nuance and gesture played out with precision. The experience of the veteran cast was evident, particularly with Valjean (Greg Stone) and Javert (Tom Zemon). Both Stone and Zemon have played their roles on Broadway and each leaves the audience in awe of their vast vocal and dramatic talents.
Stone in particular has a strong and powerful voice, with such control that he effortlessly moved between his rich baritone dialogue and the falsetto required of the tender ballad Bring Him Home.
Zemon brings an incredible intensity to his role, and with the intimacy of the theatre you can feel and see that every ounce of Javert is consumed with rage and determination to capture Valjean.
Cosette is played by Stephanie Waters, another Broadway veteran in her role with a particularly beautiful, lyrical soprano voice.
Felicia Curry, on the cover of the October issue of Washingtonian Magazine as a Performer Not to Miss, is Eponine. Well-known to local audiences from her many appearances in various roles at MetroStage, she rises to new heights in Les Miz with a commanding rendition of one of the shows signature tunes On My Own.
Andrew Call as Marius, Tracy Lynn Olivera as Fantine and Chris Sizemore as Enjolras also turned in particularly noteworthy performances.
Adding to the magical theatrical experience were the stunning period sets by Walt Spangler and costumes by Kathleen Geldard, all perfectly augmented by the lighting design of Mark Lanks.
The industrial and innovative stage was a study in precision as sets were flawlessly raised from the floor or lowered from the rafters, perfectly capturing the essence of the Parisian underworld and culminating with the epic barricade battle scene.
Les Miz is known for its intensity and overwhelming emotions, and several scenes elicited tears from the audience, particularly when Eponine breathes her last breath in the arms of Marius, the man she has secretly loved and ultimately died for.
If you have never before seen this legendary musical, or if you have seen it a dozen times, Signatures production of Les Miz impressively recreates the grandeur of the original Broadway spectacle. It is extraordinary and breathtaking and definitely not to be missed.

Due to overwhelmingly high ticket demand, an additional four weeks has been added to the run of Les Miserables, which is playing now through February 22 at Signature Theatre, 4200 Campbell Avenue, Arlington. For tickets or more information, visit www.sig-online.org or call 703-820-0236.