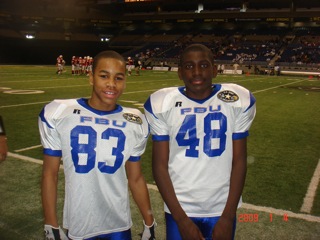 It was the trip of a lifetime for Alexandrias Raeshawn Smith. The 8th grader at Walt Whitman Middle School was selected from tens of thousands of nominees across the country to play in the inaugural Youth All-American Bowl football game held at the Alamo Dome in San Antonio last weekend.

The experience for Raeshawn was incredible, said Brian Newell, Raeshawns coach in the Chantilly Youth Football league. He and Jamon were able to meet Hall of Famer Ken Houston and have their picture taken with him, and also spend time with coach (Herman) Boone and coach (Bill) Yoast from the Remember the Titans movie.

Jamon is Jamon Cofield, another member of the Chantilly youth football program who played on the 7th grade All-American East team and whose cousin Barry plays for the New York Giants.
The inaugural event honors the top 7th and 8th graders in the nation, bringing them together to play in an all-star format modeled after the U.S. Army All-American Bowl, which was held the same weekend.

The U.S. Army All-American game is nationally televised and features the top high school football players from across the country.

Former T.C. Williams coaches Herman Boone and Bill Yoast have been the honorary coaches of that game since its inception in 2002, and the Coach of the Year trophy is named after Yoast while the winning team receives a trophy named after Boone.

Coach Boone and I were asked to speak to the young players this year, said Yoast, who had just returned from the game to his home in Delaware. I tried to tell the kids that football is not just about physical strength, its about emotional, spiritual and mental fitness as well. Character is the most important lesson for young players to learn.

Boone and Yoast both spoke about character and resiliency, but also about disappointment. Yoast was particularly inspiring when he talked about his disappointment at not being named the head coach at T.C. Williams.

It was hard not to be moved by the story that coach Boone and coach Yoast shared with these young athletes, said Kristian Dyer, the Director of Communications of SportsLink, who produced the weekend of events. To see firsthand the adversity that they faced and the lifelong bond which they forged from all of this to say it was inspiring would be an understatement. Those moments with the coaches, blending together the passion everyone in the room has for football with a story of integrity which still rings true today, is something that the Youth All-Americans will never forget.

Raeshawn, along with the other budding NFL stars, were also able to meet and talk with Vince Papali, whose dream to play in the NFL was chronicled in the movie Invincible.

Overall, it was an amazing experience, said Newell, who was also the coach of the 7th grade East team. The talent on both teams was incredible and featured several former NFL players sons, most notabley Ray Lewis III and Christian McCafferey, whose dad Ed played for the Broncos.

Newells team lost 21-14 in a tough game against a fast 7th grade West team. Smith played wide receiver and had one catch for 20 yards as his 8th grade East team won 16-14.

It was an incredible five days in San Antonio, said Newell, still clearly excited about his experience. To be able to spend time with the countrys best high school senior football stars as well as several current and former NFL players is an experience that Raeshawn and Jamon will remember forever.