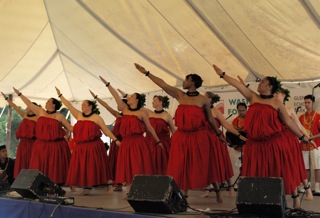 In Hawaiian culture, there is a strong oral tradition called a mele inoa, or name chant; the most famous ones are composed for Hawaiian kings and have been passed down for generations. Halau Hoomau I ka Wai Ola O HawaiI brings that tradition to the nations capital Inaugural weekend when it will debut a special mele inoa composed in honor of the 44th president.

In performances at 1 p.m. Saturday, Jan. 17, and at 3 p.m. on Sunday, Jan. 18, at the Smithsonians National Museum of the American Indian (NMAI), the Hawaiian dance and music troupe will perform Hanau I Ka Nuho O Ke Alii, a chant composed by Manu Ikaika, the groups leader, in honor of the Hawaii-born president. The Alexandria-based group is comprised of more than 80 members from Virginia, Maryland and the District of Columbia.

According to Honolulus Bishop Museum, a mele inoa is a name chant composed in honor of a person and a gift that will remain for generations to come. Ikaika said, The inauguration of Barack Obama has a special significance to the people of Hawaii. This oli (chant) is our special gift to our countrys new leader. As is traditional, Ikaika has composed two versions: a mele inoa (name song to be performed with accompaniment) and an oli (a chant performed without accompaniment).

Ikaika, an expert in Hawaiian traditions schooled by some of Hawaiis best known cultural icons, likens the excitement around inaugural festivities to the coronation of Hawaiis last king 125 years ago. At the coronation of King David Kalakaua, Hawaii experienced a cultural renaissance with the reintroduction of Hawaiian music, traditions and chants that were suppressed far too long, said Ikaika. The inauguration of our first Hawaii-born president signifies another kind of cultural renaissance for America, one that celebrates our great diversity and embraces the tremendous value it brings to our country.

The chant will be performed in the soaring Potomac Atrium of the museum by students of the halau (school). I would like to issue a special invitation for all the Hawaii residents that will be in DC for the inauguration tojoin us for this performance, said Ikaika. Its free and we plan to involve our audience in the festivities.

Halau Hoomau I ka Wai Ola O Hawaii is led by Ikaika, a composer and choreographer of Hawaiian music and dance, a skilled artisan of Hawaiian crafts and an accomplished musician, proficient at bass, slack key, and steel guitar, ukulele, drums, Tahitian drums, and the ancient Hawaiian instruments of the ipu heke (double gourd), ohe hano ihu (nose flute), and pahu (sacred drum). Halau Hoomaus performances in the Washington metropolitan area include the Kamehameha Day Ceremony at Statuary Hall in the U.S. Capitol, Presidential Inaugural Parades, the Washington Monument, the Smithsonian Institution Museum, the Kennedy Center, the Barns at Wolf Trap, and the Birchmere. Ikaika supports many Hawaiian cultural events for the Congressional staff and the Office of Hawaiian Affairs in Washington D.C.