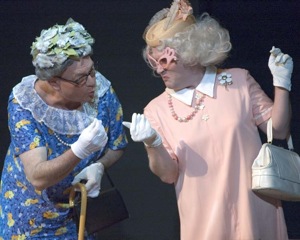 Tuna, Texas, may be the third smallest town in the Lone Star state, but it is home to the largest collection of eccentric citizens, all of whom make their appearance in the timeless comedy Greater Tuna, now playing at the Little Theatre of Alexandria.

Set in the fictional town of Tuna, the play is the first in the Tuna Trilogy series (followed by A Tuna Christmas and Red, White and Tuna) written by Jatson Williams, Joe Sears and Ed Howard, who shine a spotlight on the one-stoplight town and its self-righteous but hilarious inhabitants. The original play debuted in Austin in the fall of 1981 and premiered off-Broadway in 1982.

The two-man play stars LTA newcomers Shawn g. Byers and Jeff Murray, who together portray the 20 different characters in the satire on Southern life. The wildly diverse characters include young, old, male, female and wacky and wackier.

Byers and Murray open the show as radio hosts Arles Struvie and Thurston Wheelis of station OKKK, who report on everything from the weather to the death of Hanging Judge Buckner, who was found dead of a stroke while wearing a Dale Evans swimsuit (a modest one-piece and not a string bikini as originally reported). The two talented actors morph into character after character, such as the dress and ammunition-belt wearing Didi Snavely and the teenage Charlene Bumiller, whose seven-year quest to make the local cheerleading squad is a constant source of angst for her entire family. Throw in the local Smut Snatchers of the New Order group and you have one of the funniest parodies that is still as timely now as it was in its debut.

Byers tackles the younger character roles while Murray takes on the various older citizens of Tuna. Both more than ably rise to the challenge of taking on a different accent, attitude and demeanor for each of the various characters that they play. The shift in roles is seamless, a testament to the talent of the actors as well as the many hours of rehearsal time spent just on the costume changes.

Murray masters his roles that range from the old Klan bigot, Elmer Watkins, to the elderly Pearl Burras, who has a penchant for tainting the food of local pets, while Byers shifts from the pigtails of the overweight Charlene to the simple-minded but tender teen Petey Fisk, who represents the local Humane Society.

Produced by Marian Holmes and directed by Alan Edick, who met and literally married his wife Maureen at LTA, the show itself is a marvel of coordination between cast and crew. The simple set, designed by John Downing, perfectly evokes a small town atmosphere, ranging from the radio station newsroom to a funeral home or church meeting hall.

Greater Tuna is an over-the-top caricature of rural life, as the winners of a school essay contest include Human Rights, Why Bother? and The Other Side of Bigotry. While the parody on the bigotry of small-town life may not be for everyone, it is a testament to the art of acting and especially to the vast talents of Byers and Murray, who both deliver brilliant performances. It is a must-see for anyone who appreciates the comedy of what is no doubt a politically incorrect satire.

Greater Tuna is playing now through January 31 at the Little Theatre of Alexandria, 600 Wolfe Street. For tickets or more information, visit www.thelittletheatre.com or call 703-683-0496.