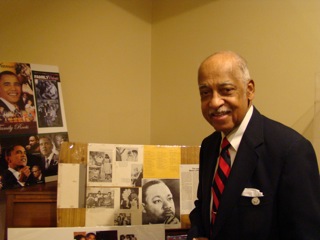 Carlton Funn is one of those people who has spent his entire life not only dreaming of things that never were and saying why not, and then actually making them happen. From the time Funn was young, his mother instilled in him the importance of volunteering and making a difference in the world, and Funn has proceeded accordingly in life and made a difference in the education and lives of many children.

As an educator, Funn has not only been a role model for kids, he developed a traveling exhibit called National/International Cultural Exhibits (NICE), which helps provide its visitors with the backgrounds and foundations of African American Heritage and 28 other cultures.

Born January 29, 1932, Funn has lived in Alexandria for nearly all of his life. His education at Lyles Crouch School and Parker-Gray High School prepared him well for his Bachelor of Arts degree from Storer College in Harpers Ferry, West Virginia, and then his Masters in Education at Virginia State University in Petersburg. He also took other higher education courses at the University of Virginia, George Mason University, George Washington University and Rocky Mountain College.

His course work, education and his mothers fine example of being a caring teacher when he was growing up all inspired Funn to go into teaching when he graduated from college. I followed in my sweet mothers footsteps, said Funn. She was a teacher. I liked the way she managed our big family too. When I was in college, I thought I would like working with children and I ended up loving working with them. As with everything Funn undertakes, he took on the challenge of teaching with enthusiasm and taught in a variety of places including the Loudoun County Schools, Fairfax Country Schools, the District of Columbia and Alexandria.

Funns sister, Mattie Funn Hopkins, said that her brother loved teaching and inspiring children. He tried to get kids engaged. He wanted them to listen, learn and really understand. My brother believes that if kids dont understand, then they will stop paying attention.

By all accounts, Funn got thousands of students to listen and pay attention. He explains that his success in teaching students is attributable to Five As:

Attendance – If you are not present, you cannot perform.

Attitude – Bring a positive one.

Acheivement – A positive outcome for today and tomorrow.

Funn had his teaching efforts recognized in 1999 by the Virginia General Assembly through House Joint Resolution No. 796. The resolution commended Funn for being the 1998 Mid-Atlantic Region winner of the Excellence in Teaching Award. The teaching award is given annually by the National Council of Negro Women, Inc., and is sponsored by Shell Oil Company. Funn was honored for his 40 years of teaching in Alexandria and Washington, D.C. and for creating the NICE exhibit. The commendation states that Carlton Funns excellent teaching has been characterized by his Five As to Success: Attendance, Attitude, Attention, Atmosphere, and Achievement; and … this approach has contributed materially to the success of thousands of Carlton Funns former students and has had a lifelong influence on them.

I loved teaching, and I worked with some great students and some wonderful principals like Princess Whitfield in Washington, D.C. She knew how to teach the correct way, how to manage children and how to get teachers to use their talents, explained Funn. When I was teaching 8th grade American history, I put together an 11-table display in the multipurpose room about the use and misuse of drugs. Then, I invited her to listen in when I gave a talk to my students. She liked it so much she gave me a week off from teaching American History and had me give my use and misuse of drugs talk to all of the classes in our junior high.

The feeling of admiration is mutual. Now retired, Whitfield has a high regard for Funn. Whitfield explained her admiration when she said that, Mr. Carlton Funns desire for excellence in education has inspired the young people whose lives he has touched and tapped over more than half of a century. He is to be saluted largely because he is one who was able to positively impact young people…by making them feel important. Mr. Funn made blackness something to be proud of.

The NICE collection arose out of a glaring need that Funn observed when he began teaching at Lyles Crouch. To his dismay, he discovered that the children were still using the exact same history books that he had used as a child 10 years earlier at the same school. Those history books had only a small amount of information about African Americans and other diverse cultures, and most of the text was about slavery. The American history accounts in the textbooks neglected to mention the achievements and contributions of many ethnic groups.

Funn pointed out this unbalanced historical overview to his principal, Virginia Hilton, and asked where he could get more information. Hilton said that Funn would have to find out for himself. That comment was the beginning of his 51-year endeavor to assemble and create NICE. NICE has a threefold purpose, which is to promote awareness, human dignity and cultural understanding. Today, the NICE exhibit has grown to 287 tables, displays and exhibits of 28 different cultures, and it has been displayed over 560 times in 12 states. In 2008, Funn was recognized by the Alexandria Historical Society for his lifetime of service preserving and promoting African-American heritage through National /International Cultural Exhibits (NICE).

The NICE exhibit is not all that Funn has contributed to Alexandria and the country. Funns mother always told him, If you want things to change in your community, you have to help by giving back to the community by vo
lunteering your services. According to Funn, she was always helping out different community organizations. My mother set a good example for my five brothers, my sister and me when we were growing up.

During his 70-plus years, Funn has offered his time and talents to a number of organizations in Alexandria and Washington, D.C. He has helped the Alexandria Police Department, the Council of Governments, the Human Rights Commission, the Olympic Boys and Girls Club, Omega Phi Psi, Hopkins House, the NAACP, the Urban League, The Society for the Preservation of Black Heritage, the Parker-Gray High School Alumni Association, Storer College Alumni Association, Alfred Street Baptist Church, various school PTAs, the Community Drug Awareness, the Alexandria Mayors Blue Ribbon Committee on Teenage Pregnancy, the Grandfathers Group, the Alexandria 250th Commission and the Martin Luther King, Jr. Elementary School Poster contest. I have thoroughly enjoyed all of my volunteer experiences, but right now I am most excited about the Martin Luther King, Jr. Elementary School Poster Contest, said Funn.

In September 2000, Washingtonian magazine ran a story about Funn and his work with the Grandfathers Group, a mentoring organization that pairs retired African American men with African American boys who need a positive role model and mentor. The Washingtonians story is a heart-warming tale of Funns experience mentoring a young man and former student of his, Robbie Preacher.

Funn went on to sum up his life, saying, I love what I do and sharing my NICE exhibits with those who are interested. It has been a labor of love and I am happy to take it anywhere folks are interested. I also love my family. My wife passed away in October of 08 after 49 years of marriage. She was a retired teacher who taught for 34 years. We did a lot of volunteering together. I have three wonderful kids and three grandkids.

These days, time seems even more precious to Funn. He continues to love life, humbly make a difference by helping others and savor his experiences with people. The quote on the back of his business card seems to sum up Funns thoughts on life. It reads: Yesterday is history. Tomorrow is a mystery. Today is a gift. Use it well.