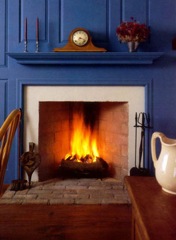 When Steven Jorden decided to add a fireplace to the living room of his Del Ray home four years ago, he followed his architects recommendation and installed a Rumford model. And we have been really happy with it, he reported.

The design is a couple of hundred years old but it has a couple of advantages, Jorden explained. It draws very well, so you dont have a problem of smoke coming out of your home, but at the same time it reflects a lot of heat to warm the room, thus cutting down on utility bills.

At Rooftop Chimney Sweeps in Alexandria, Andy Raycroft explained that, The Early American design was actually much more efficient than the more recent replacements. Fireplaces built in the last 100 years were actually pretty bad, he said.

People had changed to coal and then went back to wood in the 1920s (possibly following the Colonial Revival home-design trend). But they didnt know how to do it, he added.

The Rumford gave off more heat than the later models. In todays market, that helps to make it a pretty hot item in more ways than one.

In this last year, we have seen the return to building fireplaces, reported Paul Furman at L.C. Smith Brick of Alexandria. I can only attribute it to the high fuel costs we have seen.

L.C. Smith is the local distributor for the Buckley Rumford Company, which provides the plans and components for masons building the fireplace. Rumfords are becoming more popular as people become more energy conscious, Jim Buckley reported. They can keep the temperature low and use the Rumford as an auxiliary heater to warm the room instead of turning up the thermostat.

He went on to say, That works especially well in houses with radiant heat, which is often slow to respond to daily temperature fluctuations. By not turning up the heat, the Rumford fireplace may provide as much as 10 or 20 percent in fuel savings.

Buckley explained its advantage by saying, Rumford fireplaces are tall and shallow to reflect more heat, with streamlined throats to carry away the smoke with little loss of heated room air. (The throat, as the name may imply, is found above the hearth.)

The Rumford fireplace flourished from 1796 until 1850. Born Benjamin Thompson in Woburn, Mass., the inventor had to flee America in 1776 because of his Loyalist views. Working for the Bavarian government, he gained his title as a Count as reward for his studies on the nature of heat.

Rumford fireplaces are enjoying a comeback today, Buckley said. They are generally appreciated for both their tall classic elegance and their heating efficiency, making them an ideal blending of the old and new.

Now the Rumford is being brought up to date in ways that the creator could barely have imagined, including both contemporary styling and electric inserts.

For homeowners like Jorden, though, the old ways remain best.

We considered a gas log, but we were much more attracted to a wood-burning fireplace, he said. It creates a better ambiance and is a better way to help heat the room. A gas or electric log could have been substituted, but as he said, I like tending a fire, and a wood-burning hearth seems more classic, too.

Especially in the winter, as Jorden added, Between the warmth and the atmosphere, it is a nice place to gather.

And that has not changed much at all since Count Rumfords day.