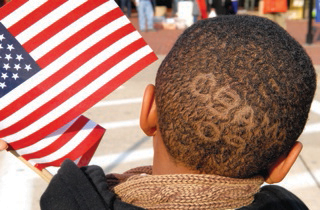 Whatever you call it, January 20, 2009, an Inauguration Day more than 200 years in the making, was always going to be Barack Obamas day and there was no shortage of witnesses making their way to our nations capital for the historic event.

Anticipation had been building since early November, culminating in the fever pitch of Tuesday morning. By the time I reached the Alexandria waterfront at 7 a.m., two boatloads of Inauguration-goers had already left the dock, and some of my own friends had lined up on the National Mall even before my alarm sounded at 6:30 a.m.

The 8 a.m. Potomac Riverboat water taxi from Old Town to Washington, D.C. and the Inauguration of Americas 44th President effectively avoided the masses marching across the bridges between Virginia and the District, bypassing the thousands cramming onto the Metro system as well. That was as expected and duly appreciated. It was the time for reflection and nervous anticipation during the trip up an icy Potomac River that came as a pleasant surprise.

Of course, there was the spectrum of questions. Just how many people will show up: a million two million four million? Where will I end up on the Mall? How intense will the security be? How long will it take to get out of the capital?

Those questions seem insignificant compared to possibly the biggest question of all: What will Barack Obama say in his first speech as President of the United States to unite the nation in the midst of so much uncertainty?

Regardless of the questions and answers, its apparent now that I may never see anything like Inauguration Day 2009 again in my life.

Anxious passengers queued to disembark from the boat and set off to join the sea of faces that took shape during the mile-plus walk from the Washington pier to the National Mall.

Turning the corner from 7th Street to Virginia Avenue the Mall could only be accessed from 14th Street the stream of people swelled into a river, all seemingly giddy in spite of the cold. People cheered from the bridges above; the people below, filing through, cheered right back.

At sporadic intervals, groups broke out singing in the middle of the street.

There were hawkers with all sorts of Obama fare, from hats to buttons and shirts to posters. There were hand warmers for sale, too. Those would have been helpful even for a native Vermonter.

By the time I reached the Mall around 10 a.m., it was utterly packed. People were no longer being allowed into the stretch between the Washington Monument and the Capitol. One woman who passed by saying, Its all full! didnt miss the mark by much.

I settled on weaving my way toward the foot of the monument, which I hoped would make for good photography as well as a noteworthy reference point for the future.

Over the course of the day, what may be the most enduring memory was the general good will within the crowd. Working to get through the sea of waiting onlookers, not one appeared angered at another person cutting by them in the crowds.

Instead of the bothered frowns found in similar situations in the stands of a football game or at a rock concert, it was, generally, nothing but smiles. Even after the proceedings, with everyone thoroughly chilled from the wind, the vibe remained positive.

Aside from being good-natured, the monumental crowd was also engaged they came to hear the nations first African American president speak, not just see him sworn into office.

The controlled stampede that followed the end of the Inauguration ceremony may have devoured most of 18th Street, but within about two hours, things had cleared up along the Metro (Yellow Line) back to Alexandria so that there were no serious setbacks on the platforms. Almost unbelievably, there were no serious incidents reported by the D.C. Metropolitan Police.

Taking on the challenge of making the trip into the District from Alexandria on Inauguration Day provided the experience of a lifetime and was more than worth it.