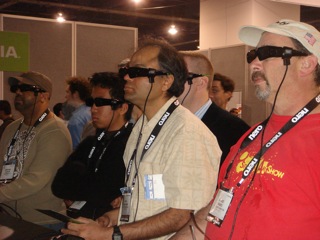 No matter where you turned, you saw them. Whether in the hands of one of the tens of thousands of attendees sprawled on the floor of the Las Vegas Convention Center hallways or in the booths of exhibitors, computer netbooks were clearly the most talked about and sought after gadget at the recently completed Consumer Electronics Show.

More difficult to find but just as talked about was the new Palm Pre, the latest smartphone that won several honors at what has become the worlds largest showcase for the consumer electronics industry.

While neither netbooks or smartphones are new, both created a buzz this year with established companies like Sony and Palm leading the way with impressive innovations that created an excitement in an otherwise subdued atmosphere.

Despite difficult economic times, sales of the popular netbooks soared over 160 percent in the third quarter of 2008. Most are priced under $500 and to some almost seem like a toy.

Not so with Sonys award-winning P-series Lifestyle PC. Aiming for the mid-to-high end buyer, Sonys new mini laptop has an 8-inch screen, is less than 1-inch thick and weighs in at 1.4 pounds. Features include a 3G mobile broadband antenna, 802.11n Wi-Fi, GPS and Bluetooth. In a sea of thousands of netbooks, this one clearly stood out.

The Palm Pre, which won the coveted CNET Best in Show and Peoples Voice Awards, is a pint-sized smartphone debuting Palms new webOS.

Expected in stores sometime in the first half of this year, the Pre will take on the iPhone, with a large 3.1-inch touchscreen, full slide-out QWERTY keyboard, Wi-Fi, GPS and a 3.1-megapixel camera with an LED flash and navigation.

While not as practical as the Pre, the LG Watch Phone always had a crowd of fans trying to get a glimpse of the James Bond-like gadget, a surprisingly sleek piece of hardware that features a touch-screen interface, text messaging, speakerphone, Bluetooth, music player and camera.

With more than 30 different product categories on display, the CNET Best of CES Awards were announced in the following categories by the leading technology website: