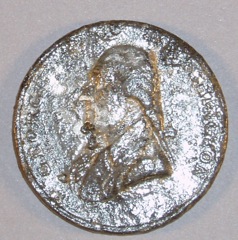 This month, the Alexandria Archaeology Museum identified a small token excavated 10 years ago in Alexandria as a 1797 medal commemorating George Washington. This artifact will be featured in Hail to the Chief, a new mini-exhibition at the museum now open in honor of the recent presidential inauguration, as well as Presidents Day and the George Washington Birthday Parade in February. The exhibit will be open through Tuesday, March 31.

Alexandria archaeologists excavated the George Washington medal in 1998 at Shuters Hill, the site of the George Washington Masonic National Memorial. The heavily tarnished disk was examined in the laboratory, where a silhouette of Washington was visible on one side and events associated with Washington were listed on the other. There was nothing to indicate the date of the medal, so it was conserved and stored with other artifacts from the site.

Early this year, prompted by interest in the inauguration, archaeologists retrieved the medal and began to research its history. They consulted Louis Jordan, a numismatic expert, who was able to accurately identify it as a George Washington Baker 66 Medal from 1797.

This medal is among other locally excavated artifacts and historic images featured in Hail to the Chief, an exhibit that showcases American presidents, including Washington, Andrew Jackson, Abraham Lincoln and William Henry Harrison.