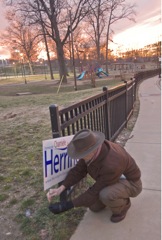 An expectedly sparse turnout of 2,679 voters pulled the levers at West End precincts Tuesday, electing Democrat Charniele Herring as delegate of the 46th District in a special election, according to unofficial returns from the Virginia State Board of Elections.

However, the unofficial results from the Virginia State Board of Elections reveal Herrings win to be a margin of just 16 votes over Republican candidate Joe Murray, prompting the Alexandria Republican City Committee to petition for a recount, and the Republican-led House of Delegates to deny Herring a seat Wednesday.

We were planning for it, but to say that we were expecting it would probably be an exaggeration, said Alexandria Republican Chair Chris Marston about filing a petition.

Herring travelled to Richmond for the first day of the 2009 General Assembly session where lawmakers refused to seat the victor of the narrow margin despite the State Board of Elections declaring Herring victorious, arguing it would be inappropriate to seat someone whos win could be overturned. For Herring, the numbers dont lie, and she is acting as such.

Right now we are continuing business as usual, Herrings campaign manager and legislative aid Jennifer Bissett said from Richmond. [Herring is] duly elected and certified by the State Board of Elections as representative of the 46th District and so we are down here to talk to colleagues and learn about procedure. Were moving forward.

Both Herring and Murray have hired lawyers to deal with the recount, according to Alexandria Democrat and Republican spokespersons. Candidates are entitled to petition for a recount if the margin of difference for a two-party election is less than one percent, According to the Virginia Board of Elections. Of the 45,891 active voters, 1,344 voted for Herring and 1,328 voted for Murray a difference of 0.56 percent.

There were seven write-in votes. Only about 5.8 percent of voters turned out for the special election.

Im formulating a team of very smart, professional attorneys and election law specialists to determine and make sure that voters did in fact elect the right person to serve the 46th district, Murray said. At this point I have not and will not concede until an official recount determines what the right outcome is.

Recount protocol states that the petition should be filed with the Alexandria Circuit Court, which has been done. From there, Chief Judge Donald Haddock Sr. will contact the State Supreme Court where the chief justice will appoint two judges from outside Alexandria to join Haddock in adopting recount procedures. In conjunction with the Alexandria and Fairfax County electoral boards, a recount will ensue.

The recount issue is just the latest development in what has been a drama-filled political soap opera that started when gubernatorial candidate Brian Moran decided to vacate his delegate seat at the last second, causing Herring, Murray and other candidates to run scurried campaigns to win their party primaries. Murray was the last candidate to file, beating the deadline by about 20 minutes and running about a six-hour campaign.

Herring and Murrays campaigns lasted about a month through the holidays before coming to an unstable end Tuesday night.