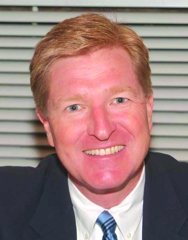 Over coffee at Table Talk on Duke Street, Virginia gubernatorial hopeful and soon to be former delegate of the 46th District Brian Moran (D) blinked his eyes repeatedly, as if just waking up from a nap. In actuality, the West End Alexandrian had just finished an hour-long interview on WTOP and probably received little sleep in recent days, given the task at hand.

Morans schedule probably requires the Jaws of Life to penetrate at this point, unless you are a Virginia voter on one of his seemingly endless tour stops around the state. As he embarks on a campaign to be the second Alexandrian governor since Sen. Mark Warner (D) left office in 2006, Moran has been confronted with challenges, as does any politician running for office, but seems more impassioned than tired.

Two glaring questions about his campaign stare Moran in the face at this point: How will he compete with the money-raising juggernaut and Democratic rival Terry McAuliffe? How will he connect his long record of service in Northern Virginia to the seemingly estranged rest of the state? Then there is his agenda and his record, of which he is confident, whether as a delegate, governor or simply an Alexandria resident.

When the Washington Post published an article that stated Terry McAuliffe could raise between $80 million and $100 million for his gubernatorial campaign, Moran was offended, prompting him to challenge McAuliffe and Democrat contender State Sen. Creigh Deeds to fundraising limits that would allow only in-state fundraising.

Its not that the McAuliffes resources intimidate him, Moran said. He does not believe that money will dictate the winner, or that its a measure of success.

A function of being a good candidate is being able to raise money, he sad. The reverse is not true. Just because you can raise money, it does not make you a good candidate. I have a record. Because of that record, I can raise enough money to be successful. How much is enough? In the ballpark of $3 million, Moran said.

Morans experience in Virginia politics outweighs McAuliffes. The former Democratic National Committee Chairman and the chairman of Hillary Clintons presidential campaign has never held office in the Commonwealth despite being a successful businessman. He has support, but Moran hopes his own record of 12 years representing District 46 in the General Assembly and chairing the House Democratic Caucus since 2001 will get him elected. Since 2001, Democrats have won House seats in every consecutive election.

At about the same time, Moran started paying more attention to the Commonwealth outside of Alexandria, a result of his broader post. When a Martinsville textile shop closed down in 2001, Moran took a bus to the southwestern town near the North Carolina border and listened to residents concerns over jobs and the local economy. Moran knows his understanding of non-Northern Virginia is key to governing the state and, despite surface differences, he draws parallels between places like Martinsville and Alexandria, nearly 300 miles away.

My job as caucus leader made me take a perspective on statewide basis, Moran said. My passions grew beyond Northern Virginia.

Transportation issues only concern Northern Virginia, right? Moran says it is statewide dilemma because, In Northern Virginia, its congestion. In southwest Virginia they want more roads. More roads and an airport will attract more business. So its a little more nuanced, but the issues are related. The more I have traveled, Ive realized we are far more alike than we are different.

Northern Virginia benefits from a stronger economy because of federal spending and the technology industry while other industries like farming and textiles suffer. But regardless of where people are in Virginia, they are worried about their retirement accounts, their mortgages, college affordability, and the quality of the schools, Moran said.

When asked about his greatest achievement while serving in the Assembly, Moran immediately responded with writing Alicias Law, legislation that protects children from online predators. He had to reach across the aisle and get Republicans aboard in order to pass it an increasingly common theme in both Virginia and national politics.

I can honestly say, but for my actions, it would not have passed, Moran said.
His greatest regret? Not getting a substantive transportation package passed that would have increased investments in mass transit and thus bring more businesses and jobs to Virginia. After working on the issue for 10 years and supporting Gov. Tim Kaines transportation efforts it may take a governorship to finally get something done.

Right now the capital markets are not generating new businesses, Moran said. People are not investing in new businesses because the capital is frozen and people are so uncertain. Its a very untenable time right now to make a large investment in a new business or construction. We need to get people attracted to Virginia and invested in it.