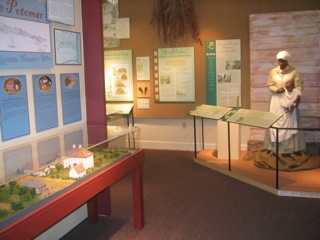 Inside the modest, brick building in the Parker-Gray District of Old Town is one of the most fascinating places to visit on the Passport to Old Town History tour. Located at 902 Wythe St. near the citys main post office is the Alexandria Black History Museum, which consists of a museum, a library and the nearby African American Heritage Park.

The museums permanent exhibits and displays depict accounts of what life was like for African Americans in Alexandria in the 17th through 19th centuries. A lecture room and short-term exhibit room are currently filled with dollhouse-type models of structures in and around Alexandria. The Watson Reading Room, the library part of the Black History Museum, is attached to the museum and the African American Heritage Park is a short drive away at Holland Lane and Duke Street.

As visitors enter the museum, they find themselves in the museum shop, which is filled with books, small gifts and pamphlets about other African American historical sites around Alexandria as well as information about the museum. The admission desk staff was helpful in answering questions about the collection and the current dollhouse exhibit. The temporary dollhouse collection, or what some visitors referred to as the model house exhibit, is on display until January 24 and captures the attention of visitors from the minute they enter the building.

Designers Sharon J. Frazier and Linwood M. Smith have done exquisite work with their exhibit entitled: Childhood Memories in Miniature: African American Dollhouses. The more than a dozen, three-dimensional, detailed displays were built over the course of 14 years and are worth seeing even if you do not have children. The dollhouses include a one-room schoolhouse complete with an outhouse, a white clapboard church, a fishing hut, a stone house, a log cabin, a gas station, a barbershop and even a depiction of Christmas in slave quarters.

The Christmas in Slave Quarters dollhouse is part of a series of four Christmas display rooms that begins with slave quarters complete with pine boughs followed by a former slaves house decorated for Christmas. Next is a 20th century family living room depicting Barack Obamas holiday decorations (including children asking for a puppy), and the last dollhouse room in the series is Linwoods General Store, with shopkeepers in their store at Christmastime.

Some of the dollhouses are modeled after the homes of historical African Americans that are still in existence today, such as Dr. Ladreys home at 327 N. Henry St., Dr. Durants house at 708 Pendleton St., Dr. Wests dwelling at 1006 Cameron Street and Reverend Atkins house at 816 Queen St.

The other side of the museum houses its permanent collection, where visitors will find themselves captivated by the display cases with African wood carvings and enthralled by the accounts and histories described on bright colored panels. The first panel is Immigrants Against Their Will, with a mesmerizing description of the beginnings of slavery.

The story describes how, in 1518, King Charles I of Spain allowed 4,000 people from Africa to be taken against their will and sent to the Caribbean to work. Explanations are given of how men, women and children were captured and forced to walk, sometimes hundreds of miles, to the coast of Africa where they were loaded onto ships heading to North America. One in 10 died en route according to the museums accounts, and the conditions on the ship were filthy and often dangerous. Many times, horrible things happened to the women and children who were not always shackled below decks; they were deemed to be less of a threat to the ships crew and less likely to cause a mutiny. Some women killed themselves and their children rather than continue to live in the wretched state they found themselves in at sea and with little hope for their future as a slave. The first slaves arrived in Virginia in 1619.

The museum chronicles how, in 1807, the British formally outlawed the slave trade, although it continued anyway. And while international slave trading was banned in 1778, trading in slaves who were already in the United States continued. The institution of slavery also created gaps in the law that had to be filled, such as when owners could free their slaves. Until 1782, there was no law that permitted slave owners to emancipate their own slaves. As slaves were finally given their freedom, the first free black neighborhoods began forming in Alexandria between 1790-1810.

Other storyboards depict a wide variety of topics relating to slavery such as the living conditions and life for slaves after they were freed. One area of the museum is dedicated to describing what food slaves ate and how much food they were given. A panel shows a comparison of the allocation of food per slave for a week at Mount Vernon compared to a slave at Monticello. Some panels describe the conditions for slaves and how some were fortunate to be at places such as Thomas Jeffersons home, Poplar Forest. Because Jefferson was not at home very often, those slaves had a lot more freedom than many others. Another set of descriptive panels has interviews from the 1930s where former slaves describe their lives and the conditions they lived under as slaves.

The descriptive panels and the display cases should not be missed even if you are visiting to see the dollhouses. There is a great deal of black history to cover and recount in this museum, and many African Americans passed through this town; an unfortunate chapter in Alexandrias history is that the city was home to one of the largest slave markets in the nation. Once you begin reading the Black History Museums descriptions, you will not be able to stop. I did not come close to seeing the over 3,000 fascinating artifacts, photos, memorabilia and objects in the Black History Museums collection.

Louis C. Hicks, Jr, the Director of the Alexandria Black History Museum, described what it was like to create the collection and historic story panels when he said, We developed the permanent exhibit, Securing the Blessing, over a five-year period because there was no documentation with a precise history documenting the African American community. It was important that we start in Africa as a means of explaining a thriving culture. Its a common misconception that all culture was learned once the enslaved Africans encountered Europeans in America. He went on to say, The museums programs and changing exhibits help provide a broader context for visitors to understand the integral story of American history from an African American perspective. Black history isnt the story of African Americans, but it is history for everyone.

Originally, the museum building started out as the Robert Robertson Library for African Americans in 1940 because the citys library system was segregated. Now, one part of the museum, the Watson Reading Room with its non-circulating collection, is key to helping focus and preserve the history and culture of African Americans in Alexandria.

After desegregation, the building served several purposes for the black community. In the 1980s the complex that is now the Black History Museum opened its doors as a resource center for black history and was staffed by volunteers. In 1989, the museum was re-dedicated and opened as an official city-run facility and was incorporated into the Office of Historic Alexandria. At that time, the facility was called the Alexandria Black History Resource Center. Then, four years ago, the name was changed to the Alexandria Black History Museum to help clarify what the entity is striving to do in preserving black history.

Through its journey of having different groups run the operation, the Black History Museum developed a focused mission, which is To enrich the lives of Alexandrias residents and visitors, to foster tolerance and understanding among all cultures and to stimulate appreciation of the diversity of the African American experience.

I remember when the Black History Museum was just our own little library in Alexandria, but we didnt know it was little back then. As I recall, it was just one big room. When I was a small girl, I painted a picture of a boy and a rabbit, and my picture was hung up on display at the library. I was so proud, says lifelong Alexandria resident Irene Macklin. I also remember checking out books and how we were always sure to get them back on time so we didnt have to pay the $.02 a day fine to Mrs. Howard, the librarian. We also took really good care of the books we checked outregardless of their condition. You were expected to bring them back in exactly the same condition as when you checked them out. Now, it is a museum, a library and where the Parker-Gray Alumni Association meets to plans events. I am glad our former library is a museum with the Watson Reading Room because it helps people understand what life was like for blacks.

The third related component to the Black History Museum is the eight-acre African American Heritage Park just off Duke Street at Holland Lane. There, visitors will find sculptures, a 19th century African American cemetery and a natural wetland area for birds, turtles and beavers. The land was given to the city in 1995 by the Norfolk Southern Corporation; part of the donated land went to the Carlyle Development and part was dedicated to being a satellite component of the Black History Museum. Jerome Meadows, a Washington, D.C. sculptor, created the structures throughout the park and the largest one is called Truths that Rise from the Roots Remembered. With this large sculpture, Meadows strives to show how Alexandrias African American citizens have contributed to the citys growth.

The Black History Museum has a suggested admission donation of $2 and admission to the park is free. For more information, visit oha.alexandriava.gov/bhrc/, call 703-838-4356 or go to the Museum at 902 Wythe Street between 10 a.m. and 4 p.m. Tuesday through Saturday.