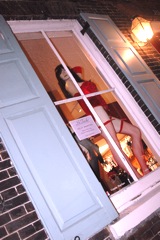 The century-old streets are fraught with complaints and wide eyes as residents and tourists walk by the lingerie-laden mannequins ogling passersby from the display windows. A small, electric red OPEN sign either entices or offends, depending on your outlook.

You got your lace, your fishnet and your mesh, said Patrick, the general manager of King Streets newest shop. He was describing a small fraction of the product line for sale at Le Tache, a sexual accessory store that opened last Tuesday in Old Towns high-traffic waterfront district.

City officials say their inboxes have been flooded with emails from residents offended at the stores prime location in the historic district known for its high-end restaurants, boutiques and art galleries, not for slinging videos like Nailin Palin, a pornographic film with a character that spoofs Alaska Governor Sarah Palin.

Its an attraction, to be honest, said Patrick as he unloaded and organized various novelties on the stores main floor. Its literally a retail store.

Not everybody sees it this way. Aside from the scores of all negative emails Mayor Bill Euille says he has

received regarding the sex shop, parents are concerned with the sex shops proximity to toy stores like Why Not?, just a few doors down. Le Tache The Spot in French sits with an art gallery on either side, embossed like a woman wearing a tube top to a christening.

Its just not the right spot for something like this, said one mother who wished to remain anonymous. This area is full of schools and families.

The business is there legitimately, according to officials. There is no ordinance or prohibition against such stores and Euille checked with the Office of the City Attorney and Planning and Zoning to make sure.

The mayor also said that he called the owner, alerting him that he would be stopping by soon to check it out for himself, joking that he would not buy anything, but perhaps find ways to make the store more palatable for the area.

We cant force them out or anything like that, Euille said. But certainly its not the type of establishment I or anyone else would want to see in a historic district.

Aside from the shapely mannequins in the storefronts window, scores of lingerie can be seen hanging on racks, but novelties (It should be noted that novelty is a euphemism for adult toy which is a euphemism for an array of unmentionables in the shop.) and movies only line the shelves of the basement, top floors and back of the shop, where employees say customers need an adult-aged ID to get into.

People are like, This cant happen in Old Town, said Rachel Albright on her second day of work at Le Tache. Loosen up.

Lifelike bodies line the walls in the Hall of Dolls, as Albright called it. There is no question that the appendages and extremities would send many residents running for the hills, especially in such a traditional area. Le Tache is an anomaly for sure, but employees said business has been strong in its first week, even if many customers are secretive.

It doesnt scare me; it scares a lot of people, Albright said. People say theyre offended, but still come in and buy [stuff].

The shops presence, though completely legal, has raised questions of the governments role in business, and a communitys ability to control its surroundings. The retailer that previously occupied the building sold guns, while across the street a tobacco shop sells harmful inhalable substances.

Where is the line drawn?

It is a small business and its not our right to be running it out of business or out of the city as long as its a legitimate business, Euille said. All indications are that they did everything right in terms of securing the proper licenses and permits and so forth. Its like art: its in the eye of the beholder.

That being said, I havent seen it and I understand its offensive to some or most folks but maybe there is a solution there, and Id like to work with the owners and see what it is we can do to improve things.