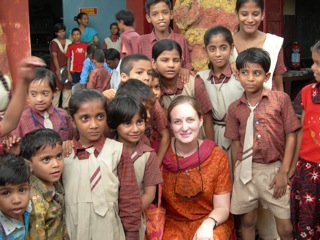 Alexandria Country Day School (ACDS) 6th grade teacher Jessica Silverman has been awarded a Fulbright-Hays grant to be part of a curriculum-building trip to Turkey and the Balkans.

Silverman is one of 12 teachers from across America, along with two college professors from the University of Arizona, that will be embarking on the four-week trip.

The group will be studying the process of cultural exchange between East and West, how institutions and concepts from Ottoman times have exerted influence on contemporary events, according to ACDS.

The head of the social studies department at ACDS, Silverman teaches a World Religions class at the school and will be able to integrate her experiences from the trip into her work in the classroom.
She has already traveled extensively through Asia (including six trips to India), Europe and Latin America, but has yet to visit Turkey or the Balkans, Silverman said.

During the trip, the teachers will be learning about the Ottoman Empire, religion and culture in the region.
Silverman, who earned a masters degree in Sanskrit and another in religious studies, said she has always been fascinated with religion and culture and that traveling to the crossroads of Eastern and Western civilization will prove enlightening for her and, subsequently, for her students.

During our Islam unit Im really interested in doing more with the students on the Ottoman Empire, whereas right now the curriculum focuses mostly on the Arabian Peninsula, Silverman said. This will be an interesting opportunity to show Islam in another context, another country and another region.

School leaders seem to be thrilled with the announcement and how Silvermans upcoming travel will benefit the students and their course of study even further.

Jessica is a fantastic teacher and her cross-cultural expertise, both personal and professional, enhances the classroom experience for the students, said Alexander Harvey, ACDS head of school. We are very proud of her!