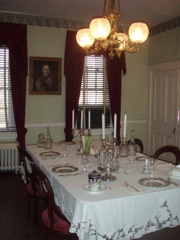 In the historic Old Town area of Alexandria, there are a number of different ways for 21st century folks to step back in time and experience life in another century. One of the most realistic ways to see what life was like long ago is to pay a visit to one of Robert E. Lees familys homes, the Lee-Fendall House, at 614 Oronoco Street.

Many in Alexandria simply know the shuttered, cream-colored clapboard house as one of the Lee family homes, while others merely have an idea that there is a historic home with an inviting, peaceful-looking garden that they catch a glimpse of behind a picket fence as they drive by on the east side of North Washington Street.

Although Robert E. Lee did not live in the house, he spent time there visiting his relatives and his boyhood home is located just across the street. Lees father, Light Horse Harry Lee, stayed for extended periods of time at the house when his mother-in-law was ill. Guided tours of the Lee-Fendall House are geared to helping visitors appreciate what life was like for the comfortably well-off Lee family between the years 1850-1870. However, during the Civil War years, the Union Army converted the wood-frame house into a hospital for hundreds of soldiers, a fate shared by 33 other homes and buildings in Alexandria.

After climbing a few stairs to the front door and entering the house, visitors find themselves in an entryway that is not unlike many 18th century southern homes and quite similar to the entry hall at George Washingtons home at Mount Vernon. There are doors at either end of the entry hall, positioned directly opposite each other so that they could be opened on hot days and a breeze could cool the house. Similar to Mount Vernon, there is also a broad circular staircase in the hall.

The main public rooms, including the formal parlor, the family parlor and the dining room, all open off of the entry hall. The soft, butter-yellow formal parlor feels most formal and contains an original painting of Robert E. Lee, Light Horse Harry Lee, and the stern faces of Louis and Harriott Lee Cazenove, who carried out the renovations on the home in the early 1850s. The Cazenoves portraits adorn the wall above the piano. Sadly, Louis died in 1852 just before the renovations were completed. A number of pieces of furniture in the parlor and throughout the house are from the 19th century Green Furniture Manufacturers of Alexandria. The handsome fireplace would have made the room toasty on a winters day.

Next door, the family parlor with a writing desk and game table feels more cozy and comfortable. Indeed, this room is where the various Lee family members spent a great deal of time visiting with each other, writing, reading and playing games.

Across the hallway from the family parlor is the spacious formal dining room with a splendidly set table. Two items are of particular interest on the table. One is a small cylindrical china piece with a top. That particular piece of fine china dates back to 1850 and was for canned milk. Canned foods were new in the 1850s and considered a novelty. This specialty china container would have shown that the Lee family was keeping up with the times. The small, dime-sized hole in the bottom was to help push the can out if it got lodged in there when it was empty. Similarly, another fine china piece is a rectangular dish with a fish on the cover that was designed for tins of sardines. This china piece would also have been an indication to guests that the Lees were keeping up with the latest household invention: the tin can.

Climbing up the stairs, one finds peaceful bedrooms that look very livable rather than ones filled with stiff antiques that require a vivid imagination to guess what the rooms were like when the house was bustling with life. A four-and-a-half-foot high, large dollhouse stands waiting expectantly almost as if a little girl might come skipping in at any minute to play.

Behind the house there is now a spacious, lovely garden on the half-acre lot, which is often the site of weddings, receptions and parties in the spring, summer and fall. Visitors are welcome to sit and read or enjoy the peaceful shade of the trees in the yard. In the 19th century, the garden was actually cluttered with outbuildings: a stable, a privy, an office, a pigeon hut and a rabbit hutch. During the Civil War there was even a dead house in the Lee-Fendall garden. There are currently plans for an archeological dig to search for the foundations of the outbuildings and hopefully unearth some treasures from the past.

In examining the home and its history, one finds that the house and garden were considered an 18th century urban plantation. Located at the corner of Oronoco and North Washington Streets, the home was built in 1785 by Phillip Fendall, the cousin, brother-in-law and step father-in-law to Light Horse Harry Lee (yes, you read that correctly), and the father of Robert E. Lee. Light Horse Harry Lee purchased several parcels of land on what was then the edge of Alexandria and Fendall chose this one to build the main home. The traditional house was home to at least 37 members of the Lee family between the years 1785-1903. In the 18th century, George Washington dined with the Fendalls and Lees at least seven times in this house.

In 1903, a successful local haberdasher, Robert Downham, bought the home and lived in it until 1937. A prominent Alexandrian, Downham entertained President Woodrow Wilson in the home. In 1937, the Downhams sold the Lee-Fendall House to the controversial labor leader John L. Lewis. Lewis served as President of the United Mine Workers and was a founder of the Congress of Industrial Organization.

The Lewis family held onto the home until John died in 1969, and then it was nearly demolished. Money was raised to save and restore the house, which is now owned and operated as a museum by the Virginia Trust for Historic Preservation (VTHP). The VTHP has spent over $500,000 to repair termite damage, and the next phase of restoration will concentrate on exterior work as well as painting both the inside and outside of the home.

Since the house had been in use for over 200 years, the VTHP had to select a period to interpret the home for visitors. They chose 1850-1870 because the home had been renovated extensively in the early 1850s. Between 1850-1853, with the Lee family in residence, the Cazenoves added porches and Italianate and Greek Revival elements to the house, which was already telescopic in style. The dining room and the kitchen are off to the side of the home, making it look a bit like a telescope.

Tracy Sullivan, the executive director of the property, said We are proud of the Lee-Fendall House and love sharing its history with families, school groups, girl scouts, boy scouts and tour groups. Many of our tours are with people who just happen by the house and other people who booked well in advance. She continued, It will be great to get all of the foundation work and interior and exterior painting done so we can focus on raising the remainder of our challenge grant money for the archeological dig in the back garden.

Sullivan ended our tour and interview by adding, I am also very proud of the fact that we are the only independently run historic home in Alexandria. Plus, in a town that used to be the hometown for the Lee family, we are the only place out of Lee family homes and buildings that you can tour today.

Although the Lee-Fendall House is listed in the National Register of Historic Places, on the Virginia Landmarks Register, and is a documented contributing feature to the National Historic Landmark District of Alexandria, the VTHP receives very little or no regular financial support from the city, state or federal government. All donations are welcome. Call 703-548-1789, visit www.leefendallhouse.org or email [email protected] for more information.